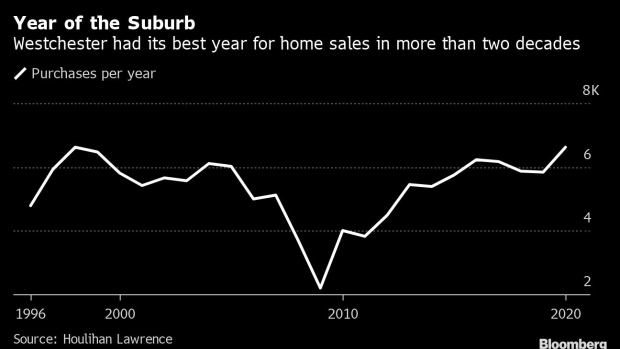 (Bloomberg) -- The pandemic-fueled exodus from New York City propelled nearby Westchester County to its strongest year for home sales in more than two decades.

In 2020, completed purchases in the northern suburbs totaled 6,635, the highest tally in records dating back to 1996, according to a report by brokerage Houlihan Lawrence.

It was an abrupt reversal for a county that for years contended with slackening demand due to its highest-in-the nation property taxes and an oversupply of older, sprawling homes far from train lines. The Covid-19 pandemic pushed those concerns aside as city-dwellers -- armed with record-low mortgage rates -- fled urban areas in search of more space for work, learning and recreation.

The median price of single-family homes that changed hands in the fourth quarter jumped 20% from a year earlier to $738,250, appraiser Miller Samuel Inc. and brokerage Douglas Elliman Real Estate said in a report Thursday. It was the biggest annual jump since the end of 2002.

Properties moved quickly once they reached the market, depleting the supply of listings. The county’s single-family sales inventory at the end of December was down 29% from a year earlier to 1,299 homes, the fewest in records dating to 1994, Miller Samuel and Douglas Elliman said.

At the current rate of sales, it would take just 2.6 months to clear all those properties, the fastest pace on record.

The rollout of Covid vaccines so far isn’t quelling demand. There were 1,459 pending home sales in Westchester as of Dec. 31, Houlihan Lawrence said. That’s 46% more than at the end of 2019.