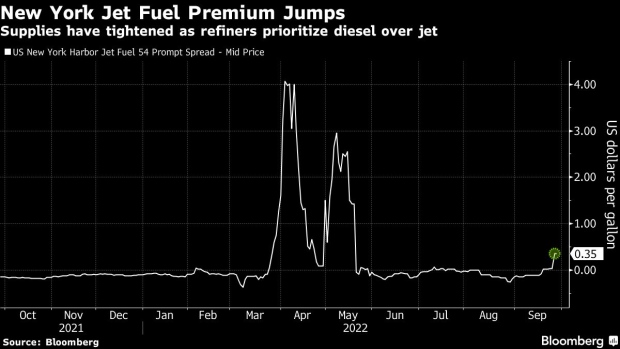 (Bloomberg) -- Jet fuel premiums are skyrocketing in New York and Houston as low inventories stoke concerns of a supply pinch.

The premium for physical barrels of New York Harbor jet fuel has jumped by nearly 20-fold since the start of the week. On the Gulf Coast, the premium over futures nearly doubled Wednesday to the highest in 14 years. The price spikes come as fuel supplies on the East Coast and  Gulf Coast are at their lowest seasonal points since 2008.

US refiners have scaled back jet fuel production to prioritize diesel output as a deadline to ban Russian fuels in Europe approaches, driving profit margins for the fuel higher. The resulting squeeze on stockpiles can trickle down to consumers in the form of higher airfare as airlines are forced to pay distributors more for fuel.

Jet fuel yields fell to 9.7% last week, the lowest level since April, according to the US Energy Information Administration. Fuel makers can adjust which fuels they make more of based on market conditions. Right now, profit from turning crude into diesel have nearly tripled from this time last year, incentivizing refiners to produce more of that fuel.