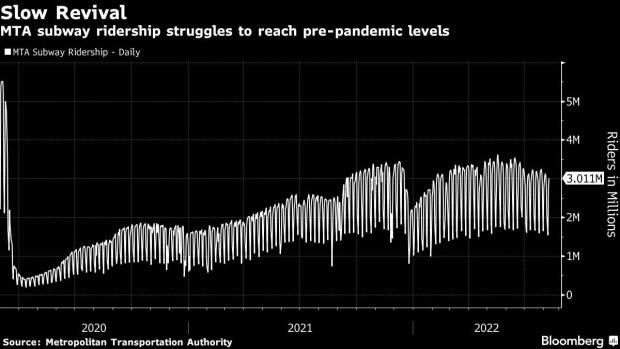 (Bloomberg) -- The head of New York’s Metropolitan Transportation Authority said progress on a plan to address the agency’s financial woes must be made by next year.

Janno Lieber, the chief executive officer of the MTA, says the agency that runs New York City’s subways, buses and commuter-rail lines needs a new financial plan in the face of lower ridership. He said that MTA can reduce its structural deficit if the legislature takes action in 2023.

“Not trying to cut our way out of this deficit is really important,” said Lieber, who spoke on an interview on Bloomberg Television’s “Balance of Power” with David Westin. “Transit is like air and water in New York -- it’s existential. People need it to survive.”

The MTA has seen weekday subway ridership plateau at about 60% of pre-pandemic levels as many office workers have settled into working from home. Before the pandemic, farebox ticket sales and tolls covered half of the agency’s operating costs. That ratio is now down to about 30%, MTA data show.

“We are an $18 billion business that’s lost 40% of its customers,” Lieber added.

Lieber said he thinks the legislature could reduce the anticipated deficit if lawmakers move to address it in 2023. He said the agency would look for ways to reduce costs as part of those discussions.

Lieber said it will “clearly” take a while for ridership to rebound. He noted that New Yorkers have gotten accustomed to working from home, which is one reason for the ridership decline. And after high-profile incidents of violent crime, concerns around “disorder” may be deterring New Yorkers from taking the subway, he said.

One key step for the MTA will be the roll out of a congestion pricing plan that would charge some motorists to enter Manhattan’s central business district, which is anything south of 60th Street.

The tolling scenarios for the plan, a first for a US city, were outlined in an environmental assessment report released Wednesday by a bevy of agencies. The new fees -- projected to charge some motorists as much as $23 to enter the district -- are projected to bring in $1 billion in revenue a year.

“We need that money and we’re counting on it,” Lieber said.