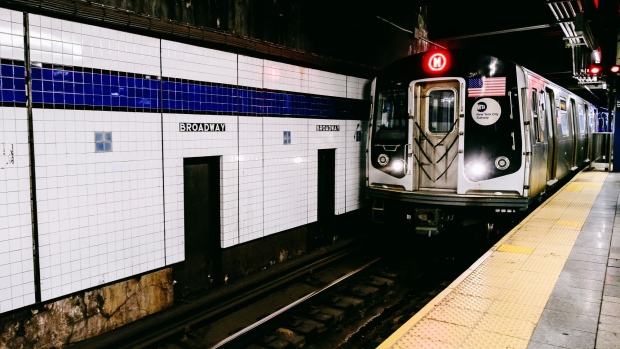 An M train arrives at the Broadway-Lafeyette Street subway station in New York, U.S., on Tuesday, April 13, 2021. New York's Metropolitan Transportation Authority (MTA), the largest U.S. public transit system, plans to sell $1.3 billion of bonds next week that will be repaid with a payroll tax, the first time the agency is offering long-term debt backed by that revenue. Photographer: Nina Westervelt/Bloomberg , Bloomberg

A potential gas-tax holiday would cost the Metropolitan Transportation Authority about $100 million this year, Janno Lieber, the MTA’s chief executive officer, told reporters Wednesday following the agency’s monthly board meeting. State officials have reassured the MTA that any lost revenue from reducing or suspending the gas tax would be matched with other state funds, Lieber said.

“The concept is dollar for dollar replacement of that money from the state general fund and we’re counting on that,” Lieber told reporters after the board meeting.

State lawmakers are considering giving motorists a temporary break on the gas tax as the cost of fuel has soared. The state dedicates a number of revenue sources, including a portion of its motor-fuel tax, to the MTA to help fund the transit agency.

The MTA has borrowed money backed by dedicated state revenue. Any replacement funds to cover lost motor-fuel receipts would be pledged to repaying bonds, Kevin Willens, the MTA’s chief financial officer, told reporters after the meeting.

The potential funding switch comes as the MTA, the largest mass-transit system in the U.S., struggles to bring more riders back to its subways, buses and commuter rail lines as more people continue to work from home at least part of the week.

Federal coronavirus aid is helping to make up for a drop in fare revenue. Still, those funds will dry up in 2025, leaving the MTA with a projected $2 billion budget gap in 2026.

“The MTA’s fiscal cliff is real,” Lieber said during Wednesday’s board meeting. As a society, as a state, as a city, we’re going to have to figure out how to make sure the MTA is fully funded so that we can provide service to all of our neighborhoods and all of our New Yorkers without putting the cost totally on the backs of the riders.”

While subway ridership has slowly increased since the omicron variant struck New York City in mid-December, weekday ridership in March has plateaued at about 3.2 million on average, Lieber said. That’s still below the 3.44 million riders the subway system carried on Dec. 9, the highest since the pandemic began, and less than the average 5.5 million weekday riders in 2019.

MTA board member and former New York City Labor Commissioner Robert Linn, who was appointed to the panel by former Mayor Bill de Blasio, said Wednesday that he is leaving after serving since June 2019. Mayor Eric Adams, who took office in January, will replace Linn.