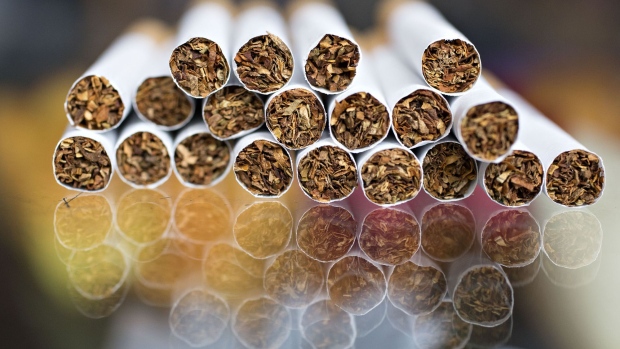 Reynolds American Inc. Camel brand cigarettes are arranged for a photograph in Tiskilwa, Illinois, U.S., on Tuesday, May 2, 2017. Reynolds American is scheduled to release earnings figures on May 3. Photographer: Daniel Acker/Bloomberg , Bloomberg

(Bloomberg) -- New Zealand will attempt to create a smokefree generation by progressively lifting the age at which tobacco can be purchased.

The government will introduce new legislation that will raise the legal smoking age by one year every year, Associate Health Minister Ayesha Verrall said Thursday in Wellington. Once enacted in late 2022, the new law will also mean only smoked tobacco products containing very low levels of nicotine can be sold, and it will significantly reduce the number of shops that can sell them by subjecting retailers to regulation, she said.

“We want to make sure young people never start smoking so we will make it an offense to sell or supply smoked tobacco products to new cohorts of youth,” Verrall said. “People aged 14 when the law comes into effect will never be able to legally purchase tobacco.”

Creating a smokefree generation is part of the government’s campaign to reduce the prevalence of smoking in New Zealand to less then 5% of all population groups, which it aims to achieve by 2025. Officials estimate smoking kills as many as 5,000 people a year, accounting for 15% of all deaths.

While smoking prevalence has dropped to 10% among the New Zealand’s European population, it is still 28% among Maori and 18% for Pacific people.

In the past, the government increased excise taxes on tobacco, driving up the price of smoking in an effort to discourage the habit. But the policy drew criticism because it increased costs for low-income households where smoking is more widespread.

“We’ve already seen the full impact of excise tax increases,” Verrall said. “The government recognizes that going further will not help people quit, it will only further punish smokers who are struggling to kick the habit.”