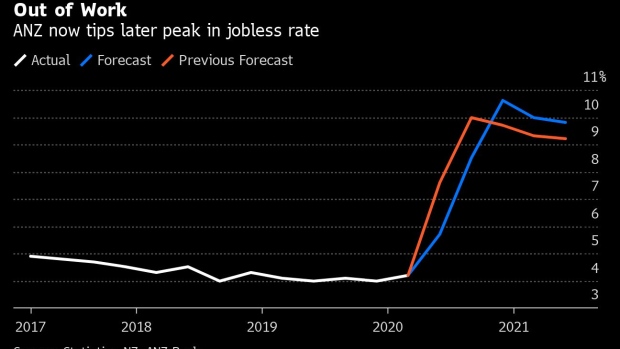 (Bloomberg) -- New Zealand may see most of the impact of the Covid-19 pandemic on the labor market after September’s election thanks to government intervention and a shorter-than-expected time spent in lockdown.

A report due Aug. 5 will show the jobless rate rose to 5.5% in the three months through June, according to the median forecast of 13 economists in a Bloomberg survey. While that’s up from 4.2% in the first quarter and would be the highest since 2015, it’s much lower than earlier forecasts exceeding 7%.

New Zealand’s success in eliminating community transmission of the coronavirus allowed it to exit lockdown and reopen the economy sooner than expected, while the government’s NZ$13 billion ($9 billion) wage subsidy helped employers retain much of their workforce during the disruption. Prime Minister Jacinda Ardern’s deft handling of the crisis has put her Labour Party in a strong position to win the Sept. 19 election.

Still, with the wage subsidy due to end next month and the closed border decimating the tourism industry, the worst of the economic shock may lie ahead. Data due two days before the election are expected to show the economy contracted as much as 20% in the second quarter.

“The labor market wasn’t as weak as we feared it might be because of the temporary supports from the government,” said Liz Kendall, senior economist at ANZ Bank New Zealand in Wellington. “The impact of the current recession on the labor market will probably occur later than we had previously thought.”

As well as the better performance of the labor market in the near term, the way the statistics agency has chosen to measure the jobless rate during the lockdown, which ran from late March to mid May, will distort the second-quarter results. It’s decided that people who were unable to actively look for work were outside the labor force rather than unemployed. That will push the participation rate lower but also suppress the jobless rate.

The participation rate will fall below 70% for the first time since 2016, according to the economist survey. Employment is projected to contract 2% from the first quarter.

The Reserve Bank in May forecast a second-quarter jobless rate of 7% and a peak of 9%. It will revise those projections in its Aug. 12 monetary policy statement. A lower reading this week is unlikely to deter the central bank from delivering more monetary stimulus, economists said.

“We know things are likely to get worse from here,” said Mike Jones, senior economist at ASB Bank in Auckland. “Employment is set to remain below the Reserve Bank’s maximum sustainable employment target for some time, keeping the bank in a mood to grind monetary policy easier.”