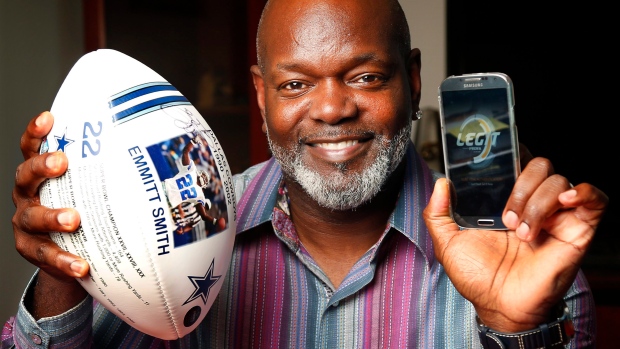 Dallas Cowboys' Hall of Fame running back Emmitt Smith poses with a football with a Legit chip, an embeddable NFC chip which can be used to verify sports memorabilia or even luxury items at his Addison, Texas office, May 24, 2017. The Dallas Morning News via AP/Tom Fox

Emmitt Smith, the Hall of Fame running back and three-time Super Bowl champion with the Dallas Cowboys, estimates that he spends 100 nights a year in hotels. Last year, he travelled over 300,000 miles on American Airlines. But he’s not the complaining type. “Travel has become a lot less complicated these days,” he says. “I’m TSA-approved, I have Clear, you can connect to the internet on the plane, and all the airports usually have plenty of plug-ins.”

“I am the lightest packer, ever,” he says. “If you don’t have to go to baggage claim, you can save time on the front and on the back end.” And he doesn’t get too picky about luggage, either. “As long as it’s got wheels, I’m good,” he says.

Most of his travel is within the U.S., but he takes the occasional trip to Cabo San Lucas for golf and to Europe or California for family vacations.

This year, he began working with Marriott Bonvoy as a spokesperson and leader of a members-only “Moment Masterclass,” in which he will take a few lucky fans through a battery of physical feats — 40-yard dash, bench press, standing broad jump — as well as mental drills such as identifying defensive coverages and offensive formations. Then they will be able to see where they rank at the same drills as NFL players.

We caught up with him as the new NFL season was kicking off to find out how he stays in shape on the road, what takes up the most room in his bag, and how sleep can sometimes be your own worst enemy.

Get into the mindset that your hotel room is your home

The first thing I do when I get to my hotel is I unpack all my clothes. I hang everything to get all the wrinkles out, set up my computer, and act like it’s my house. When I was playing, I would do that so I could focus as soon as possible, and it’s the same philosophy now: Get there and make that hotel room your room. Make it as close to home as possible.

I’ll order room service — sometimes it’s about the convenience. I can’t just go hang at the bar and be me. Sometime you [try to] be you, and then you end up having to entertain everyone. So I try to stay consistent: I’m a breakfast guy, so I’ll eat an egg-white or two over medium, have some bacon and toast, and then in the evening, I’ll find some fish or chicken.

Why you should avoid sleeping on the plane

The best thing for jet lag is to get a workout in before or after — you get your body back to normalcy. What I try not to do on a plane is go to sleep. I wake up drowsy, and I can’t get back to my regular energy, so instead I try to keep myself at my usual level. I’ll get on my laptop or do some reading, but it depends on how long the flight is. I mean, if I’m going to Tokyo, I’m definitely sleeping, but if it’s to New York, I may do some work, I may build a spreadsheet or link into the internet and take care of some emails, just to keep my mind stimulated, and so my sleep is not off. You have to learn your body.

Plan your outfits around one pair of shoes ...

I never check a bag. Even if I’m going somewhere for four days, I can fit it all in a carry-on. Dress shoes are key. I’ve found that you can reduce your load by packing an outfit that goes with more than one pair of shoes. You start to add it up, one pair or two or three — simplifying your life makes it easier to travel.

... and plan your airport strategy around everyone else

Travelling with family can be more complicated than by yourself, because with your family members, they don’t pack the same, so you definitely got to be there an hour and a half early. I got five kids and my wife, so we could have 10 or 11 bags. Not much you can do about that. I just try to make it less stressful as much as I can.

On the road, it’s hard to get a workout in unless I have a Peloton. No Stairmasters. I like cycling because it’s light on my body. I don’t feel the aches and pains like jogging on a treadmill or on the street, but I still have exerted enough energy and burned enough calories. And if I’m on a bike outside, I like to ride early in the morning, so I can go get a workout on my bike for a couple of hours outdoors. For me, it’s a moment of peace.