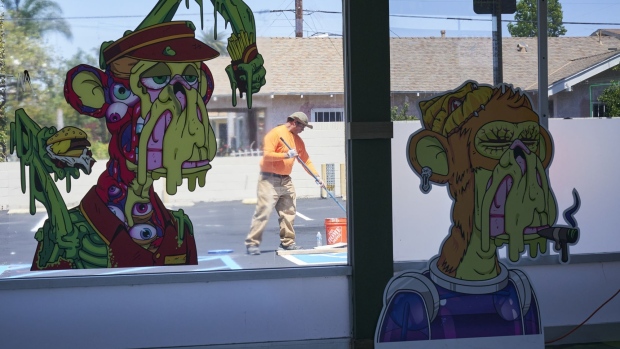 (Bloomberg) -- Prices of Ether and nonfungible tokens that often run on the Ethereum network have diverged sharply as investors snap up the second-largest cryptocurrency ahead of the blockchain’s highly anticipated software upgrade.

Ether has soared 54% between June 13 to Aug. 15, according to data compiled by Bloomberg. NFTs, on average, have declined almost 19% over the same period, according to researcher NonFungible. Cryptocurrencies hit a low in mid-June -- with Ether falling below $1,000 on June 18 -- after the collapse of the Terra blockchain and when its ripple effects began to topple hedge fund Three Arrows Capital and lender Celsius Network.

“The usual path was, if Eth went up or down, if Eth goes sideway, then NFTs had room to move,” said Sasha Fleyshman, portfolio manager at investment firm Arca. “Now it’s underperforming under any circumstances -- up, down, sideways.”

Since the most valuable NFTs -- such as artwork of bored apes and punky-looking characters -- are sold for Ether, both typically tend to move in lockstep. In the past, NFTs often haven’t fallen as sharply as Ether and have, at times, appreciated more than the token, Fleyshman said.

That has changed as investors have piled into Ether with hopes that it’ll continue to appreciate ahead of the software upgrade known as the Merge. The upgrade is expected to take place in September after being kicked down the road for several years. Ether holders are also eager to get any additional coins that could result from offshoots from the main Ethereum chain around the Merge.

But there’s no incentive to scoop up NFTs.

Instead, interest in NFTs has continued to wane and trading volumes have dropped precipitously in recent months, according to tracker DappRadar. The world’s biggest NFT marketplace OpenSea, is seeing its lowest monthly sales in a year, according to Dune Analytics.

Many blue-chip NFTs haven’t fared much better either. Bored Ape Yacht Club’s floor price -- the lowest price for an item in the collection -- has climbed by less than 15% over the past month, according to tracker NFT Price Floor. Another popular NFT, CryptoPunks, saw its floor price increase by 13%, according to the site.

Whether prices on existing NFTs ever come back is unclear, Arca’s Fleyshman said. The next wave of NFTs whose prices rise could be tied to club memberships, or access to gyms or golf courses, he said.

“I’d call this last cycle speculative,” Fleyshman said. “My hope is that the next cycle would be value driven.”