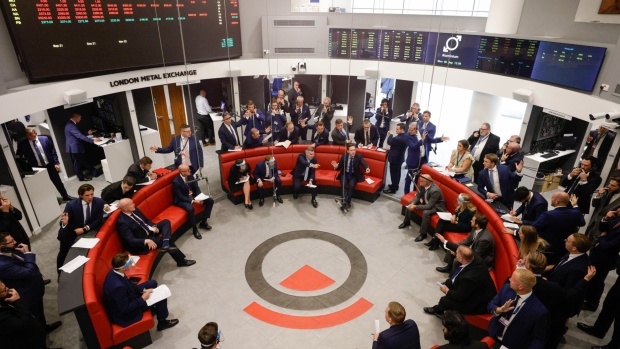 For nearly a century and a half -- with only a handful of interruptions -- the London Metal Exchange has been the place where global prices are set for industrial metals from aluminum to zinc.

At 8:15 a.m. on Tuesday morning, that stopped. The LME suspended trading in nickel, used to make stainless steel and electric-vehicle batteries, after prices spiked as much as 250 per cent in two sessions. More shocking for many in the market: the exchange later announced it would cancel all trades that took place in the hours before the halt.

The LME was moving to restore order in a market gripped by a classic short squeeze, driven by a panicky move by the world’s largest nickel producer, Tsingshan Holding Group Co., and its brokers to close some of a large short position it had built up over months.

Resolving the situation around Tsingshan and its brokers will be crucial to restoring calm. If the Chinese group can pay the margin calls from its brokers or otherwise find a way to close out its positions, the market may be able to reopen in an orderly manner. Tsingshan has now secured a package of loans from local and international banks to help it meet the wave of margin calls, Bloomberg reported on Wednesday.

The LME said, without naming market participants, that it was looking at a mechanism to reduce the short positions in the market before a restart. But many brokers criticized the decision to first allow the market to open Tuesday and then roll back the deals that were done.

“Shambolic, shameful, scandalous, calamitous, ruinous or pick any word of your choosing,” said Michael Marlowe, director at Hythe Bay Metals Ltd. “Today has been a shattering blow to all that love the LME and all those that use it to conduct their daily business.”

LME Chief Executive Officer Matt Chamberlain defended the decision, saying that some brokers would have struggled if the nickel trades had stood.

“It would have been extremely difficult for some of our market participants to continue their activities,” Chamberlain said in an interview with Bloomberg TV. “The ability of the financial system to get that money to the members in London and then into the exchange I think would have been significantly stressed.”

For brokers on the LME, one of the few remaining places in the world where traders still gather in an open outcry pit to bark orders at one another, Tuesday’s drama was a throwback to the exchange’s darkest days. The last time the LME suspended trading in one of its contracts was during the 1985 “Tin Crisis,” when an international producers’ cartel collapsed after it could no longer prop up the tin price.

That crisis was a harrowing experience that changed the shape of the market. Many historic brokers were forced out of business from the losses and, according to LME lore, the stress from the crisis shortened a number of lives.

In the nickel market, trading remains halted. The LME issued a late notice that it’s unlikely to reopen before Friday. And even after restarting it will keep the training wheels on -- trading will only happen in European hours to begin with and with a 10 per cent daily limit on price moves.

In the tin crisis of 1985, the LME addressed the effective default of the largest market participant by conducting a so-called “ring-out” process. Open contracts struck at the high prices quoted on the LME at the time trading was suspended were settled with reference to the much-lower prices that were soon seen afterward in the physical market.

Some industry participants had already been suggesting a similar solution is needed to avoid another frenzied rally when the market does reopen -- for instance by the dominant holders of long and short positions agreeing to liquidate their positions at a fixed price.

“The LME need to lock them in a room and tell them they’re not coming out until they’ve come to an agreement,” said Malcolm Freeman, a broker at Kingdom Futures who began his career on the LME in 1974. “It’s as simple as that.”

While nickel prices had been rallying for weeks amid fears of disruption from key supplier Russia, this week’s breathtaking price spike was triggered when holders of short positions, including top producer Tsingshan, rushed to close them out.

Chinese tycoon Xiang Guangda, who controls Tsingshan, had built a massive short position in nickel and is facing billions of dollars in mark-to-market losses after the spike, according to people familiar with the matter. He had closed out part of his company’s short position and was considering whether to exit the wager altogether, Bloomberg reported earlier.

Traders must deposit cash, known as “margin,” with their brokers on a regular basis to cover potential losses on their positions. Brokers in turn must hold margin at the clearinghouse, LME Clear. If the market moves against those positions, they receive a “margin call” requesting further funds -- and if they fail to pay, they can be forced to close their position.

Prices surged during Asian hours from around US$50,000 to above US$100,000 a ton before the LME announced its suspension. It later said any trades that took place after midnight London would be canceled.

“You just can’t do what LME did,” Alex Gerko, the founder of XTX Markets, a leading electronic market-maker on the bourse, said on Twitter. In a subsequently deleted tweet, he said it was “the end of the market.”

Others were more sympathetic to the LME’s position, but still had questions about its timing.