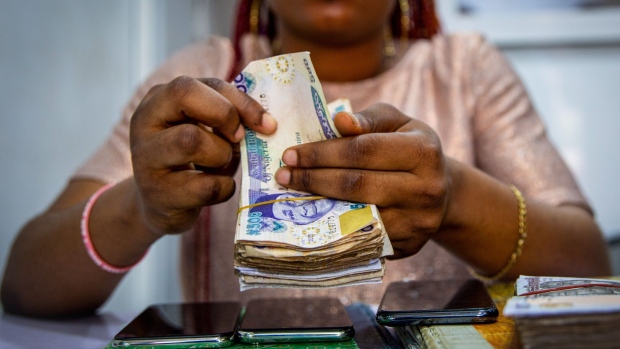 A vendor counts out Nigerian naira banknotes inside a shop at the Ikeja computer village market in Lagos, Nigeria, on Monday, March 29, 2021. Nigerians are having to contend with the highest inflation rate in four years, the second-highest unemployment rate on a list of 82 countries tracked by Bloomberg, and an economy that’s only just emerged from recession. Photographer: Adetona Omokanye/Bloomberg , Bloomberg

The decision will end the sale of $5.72 billion annually by the central bank to the West African nation’s bureaus de change -- a key source of foreign exchange for Nigerians traveling abroad and local businesses. The central bank will also stop issuing new licenses to currency-trading companies, whose number more than doubled to almost 5,500 over the past five years, Emefiele said at a virtual briefing Tuesday in the capital, Abuja.

Some bureaus de change have become “greedy” chasing higher profits and their demand for foreign currency is bringing pressure to bear on the naira and the nation’s reserves, Emefiele said. The central bank will only deal with commercial lenders going forward and all legitimate foreign-currency transactions will need to go through them.

“We have noted with disappointment and grave concern that our bureau de change operators have abandoned the original objective of their establishment, which was to serve retail users who need $5,000 or less,” Emefiele said. “Instead, they have become wholesale dealers and illegally in foreign exchange to the tune of millions of dollars per transaction.”

Emefiele also announced plans to introduce by October a digital currency known as the e-naira, which will complement existing types of money and not replace it.