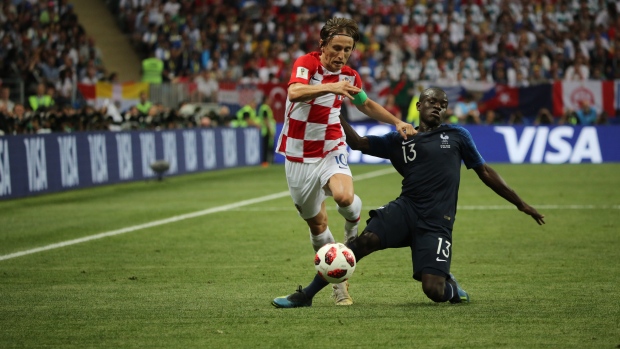 Nike Inc. (NKE.N) said it’s getting a sales boost from the World Cup teams and athletes it sponsored, giving the U.S. company a tailwind in its race to catch up with Adidas AG (ADDYY.PK) in soccer.

The final, in which France beat Croatia, was the first ever with all 22 players wearing Nike jerseys, and most of them were in Nike shoes, the company said. Demand for the French team collection is “very high” following the win, said Bert Hoyt, who manages Nike’s business in Europe, the Middle East and Africa. England’s warm-up jersey sold out almost everywhere, he added.

Nike had 10 teams in Russia, two fewer than Adidas, but had three among the final four. Among those wearing Nike shoes, Croatia’s Luka Modric won the player of the tournament award, England’s Harry Kane scored the most goals, France’s Kylian Mbappe was best young player and Belgium’s Thibaut Courtois was best goalkeeper.

“This continues the trend from the fourth quarter, when our global football apparel was approaching triple-digit growth,” Hoyt said.

For the fiscal year that ended May 31, Nike posted rising revenue for soccer for the first time in four years. In the top five European leagues, three of its teams won the season. A year earlier, Adidas almost swept Nike clean in European leagues and competitions, securing four of those five league titles, plus the Champions League and Europa League tournaments.

Another part of Nike’s strategy is signing top athletes to shoe deals with the potential to shine on the biggest stages. While 44 per cent of players wore Nike footwear at the 2010 World Cup in Germany, that jumped to 53 per cent in Brazil 2014 and to 65 per cent in Russia this year.

Adidas isn’t giving up. While several of its top teams bowed out early, the company upheld a forecast given before the tournament that it would hit a record in jersey sales this year, beating the 8 million sold four years ago in Brazil.