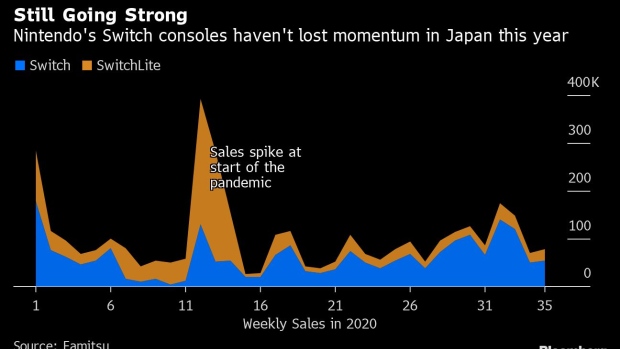 (Bloomberg) -- Nintendo Co.’s Switch gaming console is in the middle of its life cycle and the company is preparing to give it a boost with a large injection of new games in the next year and beyond, company President Shuntaro Furukawa said in an online briefing Wednesday.

Released in 2017, the Switch is now in its fourth year on the market but experiencing its fastest sales, boosted by the success of Animal Crossing: New Horizons and a global surge in entertainment demand caused by coronavirus lockdowns.

Nintendo’s last quarterly earnings far surpassed expectations and showed an accelerated shift toward digital downloads as a proportion of software sales. However, the company said Wednesday that more recent reopenings of retail stores have pushed the download ratio of sales down.

The Kyoto-based games stalwart is planning an upgraded version of the Switch console and an accompanying slate of big-name titles for next year, Bloomberg News reported in August. Looking forward to 2021 and after, Furukawa said Nintendo plans “many games” for the Switch and added that the company intends to “continue developing hardware to pursue unique entertainment offerings,” without providing additional details.

This year’s holiday season is going to be a fiercely contested time for console makers, with Microsoft Corp. and Sony Corp. planning to release new generations of their Xbox and PlayStation families. Nintendo is unlikely to suffer too much of a drop-off from its torrid year of Switch sales, however, according to Katsuhiko Hayashi of industry tracker Famitsu Group.

“Our data suggest the Switch hasn’t fulfilled demand yet,” Hayashi said. “Switch sales are likely to gain further momentum at the year-end.”