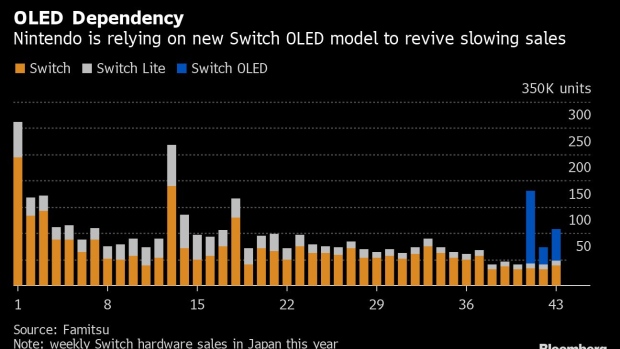 (Bloomberg) -- Nintendo Co. cut its Switch sales target in the latest response to widespread component shortages and logistics bottlenecks that have stifled the manufacturing sector.

The Kyoto-based company is now aiming to sell 24 million units this fiscal year, down from the previous goal of 25.5 million units. Nintendo upgraded its full-year operating profit outlook to 520 billion yen ($4.6 billion) from 500 billion yen, showing confidence that lucrative software sales and income from network services can prop up the bottom line. Its forecasts are known to be conservative, typically allowing the company to weather unexpected difficulties without having to lower expectations.

Switch sales in the July-September period were 3.83 million units, down from the 4.45 million units sold a quarter earlier. Nintendo reported operating profit during the period of 100.2 billion yen, lower than the 121.9 billion yen average of analyst estimates.

Nintendo has been struggling to boost output of its new OLED Switch as shortages of chips and other components hamper production of everything from automobiles to smartphones. Achieving the new hardware sales goal will depend on how heavily Nintendo prioritizes its recently launched model, Ace Research Institute analyst Hideki Yasuda said ahead of the earnings release. The original Switch and more affordable Switch Lite have seen their sales dwindle all year and the pricier new variant is what Nintendo will rely on to keep sales up heading into 2022.

The best-selling console in the U.S. in September was Sony Group Corp.’s PlayStation 5, ending the Switch’s 33 consecutive months at the top of that list, according to NPD.