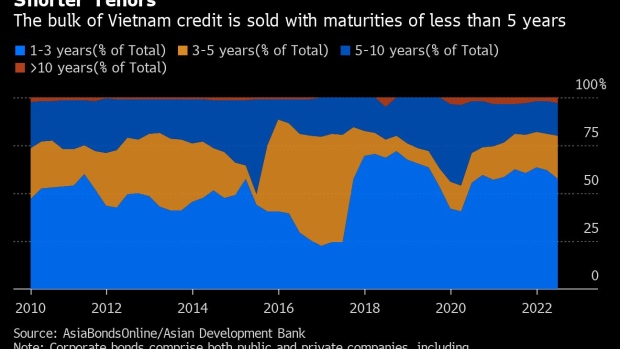 Cranes stand next to residential buildings under construction in Hanoi, Vietnam, on Tuesday, Sept. 11, 2018. The nation of 96 million people has embraced free-market reforms over the past few decades, leading to surging growth under an authoritarian one-party Communist government that offers the same political stability as China. Photographer: Maika Elan/Bloomberg , Bloomberg

(Bloomberg) -- The worst may not be over yet for Vietnamese developers besieged by a sweeping regulatory crackdown, as a funding squeeze and a historic stock meltdown show few signs of easing.

The Southeast Asian economy has made headlines in recent weeks after a corruption probe landed heavily on the country’s property developers, pummeling domestic debt sales and turning local stocks into the world’s worst-performing major benchmark. Despite a pledge by Vietnam’s finance minister to ease funding woes for builders, the sector’s repayment pressure in the next few years is keeping investors on the edge.

“There is a risk that if they’re clamping down a little bit too hard,” authorities could cause a liquidity crunch or damage investor sentiment, said Tamma Febrian, an analyst at Fitch Ratings. While that’s not the rating firm’s base case, such an outcome “could have repercussions on the entire property sector and the banking sector.”

Vietnam’s corporate bond sales and volumes tumbled this year, with sales through private placements falling by 51% to 240.76 trillion dong ($9.7 billion) through October, according to the Vietnam Bond Market Association. That represents 96% of the total corporate bond sales, it added. The benchmark VN Index has plunged 37%, driven by developers and banks amid fears of wider risk contagion.

Banks, real estate firms and construction companies are among the biggest issuers of corporate notes this year, according to the Asian Development Bank.

Vietnam’s broader financial woes, including rising inflation and a bulging debt pile, have weakened foreign investors’ appetite for the country’s assets across the board. Vingroup JSC, a major conglomerate, is the only firm to have issued foreign-currency bonds this year, raising a total of $625 million, according to the Vietnam Bond Market Association.

In a clear attempt to assuage investor concerns, Vietnam’s Finance Minister Ho Duc Phoc told Bloomberg News on Tuesday that the government does not see a wider impact beyond the select firms that have engaged in bad or illegal practices. It’s also working to ease developers’ access to capital in the long run.

By 2030, Vietnam aims to grow corporate bond volumes to 25% of gross domestic product from about 11% currently, he added.

However, investors seem worried about not just the current liquidity woes faced by developers but also their repayment risks in the medium term. ADB’s data show that the bulk of their bonds have a maturity of less than five years.

“The selloff in property stocks does not come as a surprise given the funding constraints,” said Ruchir Desai, a fund manager at Asia Frontier Capital Ltd. “Another worry for the sector is their upcoming bond repayments in 2023 and 2024 and how these will be funded as liquidity to the real estate sector has dried up.”