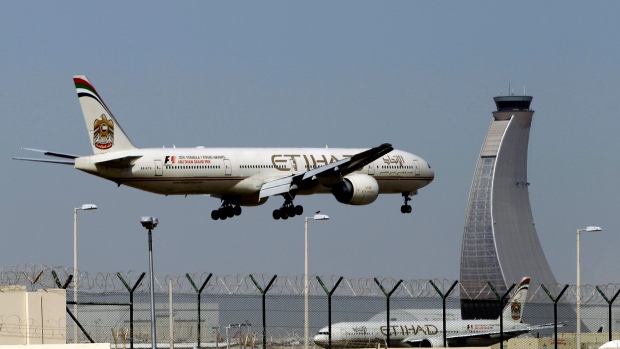 An Etihad Airways plane prepares to land at the Abu Dhabi airport in the United Arab Emirates. , AP Photo/Kamran Jebreili

The U.S. Homeland Security Department said on Wednesday that no specific timeline had been set for a decision on whether to expand a ban on larger electronics as carry-on luggage for air travel.

DHS spokesman David Lapan told reporters at a briefing there was "nothing imminent" that would require an immediate decision to expand the ban on laptops, which currently applies to 10 mostly Middle Eastern airports. He also said there has been no discussion on expanding the ban to domestic U.S. flights or flights leaving the United States.

In March, the United States announced laptop restrictions on flights originating from 10 airports, including in the United Arab Emirates, Saudi Arabia, Qatar and Turkey, because of fears a bomb could be concealed in electronic devices taken aboard aircraft.

Britain quickly followed suit with restrictions on a slightly different set of routes.

Lapan reiterated that DHS still believed it was "likely" the U.S. ban will be expanded. He said talks with Europe were not a "negotiation" over whether to expand the airports covered because Homeland Security director

John Kelly would make any decision based strictly on an analysis of threats.

Lapan said the United States would give airports at least the same four-day notice it gave Middle Eastern and other airlines in March before the restrictions took effect, but said it could be longer.

Reuters and other outlets reported on May 11 that the ban on laptops on commercial aircraft was likely to include some European countries.

In 2016, 30 million people flew to the United States from Europe, according to U.S. Transportation Department data.