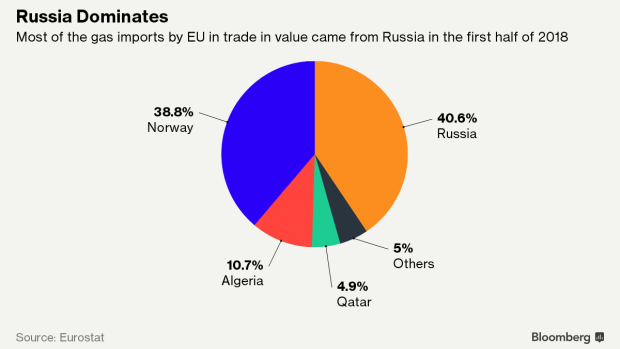 (Bloomberg) -- The extension of an undersea pipeline carrying Russian gas to Germany may be delayed by at least half a year if Denmark forces the promoters of the link to construct it along an alternative route.

The company behind Nord Stream 2 spelled out for the first time the details of a potential prolongation of work on the controversial pipeline, which it aims to complete by the end of this year. A Danish request to consider a new route would mean it will be ready to transport gas only in the second half of 2020, Nord Stream 2 said in a report made public by Denmark’s Energy Agency.

The company appealed the decision of the DEA, which is carrying out an assessment on how the new gas link would affect the environment in the country’s exclusive economic zone of the Baltic Sea. Nord Stream 2 argues the request was illegal as there are already two permittable routes that allow construction of the pipeline this year.

“The DEA’s decision must be annulled,” said Sebastian Sass, the EU representative for Nord Stream 2. The “pipeline can certainly be implemented within our timeline estimation.”

The Danish permit hurdle is not the end of regulatory problems for Nord Stream 2. A court battle looms for the project over a revised EU gas market law, which would hurt the profitability of the link. NS2 is seeking an exemption from the regulation but the European Commission has stopped short of providing assurances the link will be excluded from the new market obligations.

The new EU law includes a requirement to separate ownership of gas and transmission lines. While it applies to all new and existing pipelines, only completed links can obtain a fairly simple waiver that Nord Stream 2 argues it’s eligible for as well. Those that are not yet operational have the possibility to seek exclusion from the law in a more complicated procedure that requires approval by the EU Commission.

“Denmark can make Berlin and Moscow tremble as the Danish prime minister has expressed his hostility to the project numerous times,” said Wayne Bryan, senior European energy and commodity analyst at Alfa Energy Ltd. “But I do believe it will open despite vociferous objections within Europe and across the Atlantic.”

The link has divided EU governments, with nations led by Poland concerned about the bloc’s increasing dependence on Russian gas and President Vladimir Putin’s meddling in Ukraine. The new link would allow gas to bypass Ukraine in flowing to Europe.

Nord Stream 2 argues a new pipeline is needed to guarantee supplies will continue to flow in the coming decades as EU domestic reserves shrink and import needs rise. Opponents of the project say it hurts the bloc’s cohesion and weakens its Energy Union strategy aimed at integrating the region’s gas and power markets, diversifying energy supplies and improving security.

The U.S., seeking to tap into the European LNG market, has joined the choir of critics. Texas Republican Ted Cruz and New Hampshire Democrat Jeanne Shaheen, both members of the Senate Foreign Relations Committee, plan to introduce a bill targeting the project, according to two people familiar with the plans. A draft version of the bill would deny visas to executives from companies linked to vessels that lay the pipeline. It also would penalize entities that provide insurance to the project.

Uniper SE, Engie SA, Royal Dutch Shell Plc, OMV AG and BASF SE’s Wintershall are European partners of Russia’s Gazprom PJSC in financing the project to expand Nord Stream by 55 billion cubic meters a year. Russia supplies a third of Europe’s gas and has no plans to give up its share to the expanding list of competitors from Norway to the U.S.

If construction is stopped, it might create “a dangerous precedent,” Russian Deputy Energy Minister Anatoly Yanovsky told reporters in Berlin on Thursday.

--With assistance from Nick Wadhams and Daniel Flatley.

To contact the editors responsible for this story: Reed Landberg at landberg@bloomberg.net, Andrew Reierson, Rob Verdonck