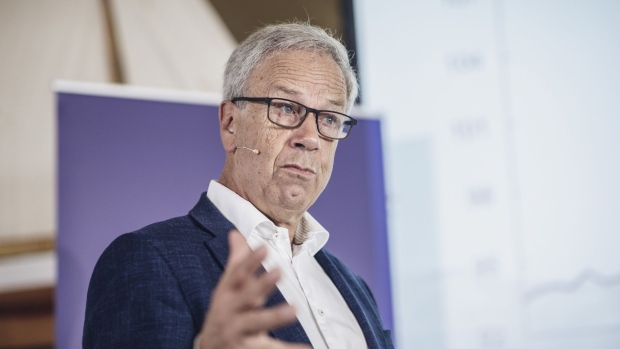 Oystein Olsen, governor of Norway's central bank, speaks during a presentation at the Arendalsuka conference in Arendal, Norway, on Thursday, Aug. 19, 2021. Norway has weathered the pandemic better than many peers, aided by the fiscal power of its $1.4 trillion sovereign wealth fund, the world’s biggest. , Bloomberg

Norway’s central bank said it’s on track to raise borrowing costs in March, citing a continued upswing in the oil-rich economy and signaling less worry over the resurgent coronavirus.

Norges Bank kept its benchmark interest rate at 0.5% on Thursday, as forecast. In its last decision under outgoing Governor Oystein Olsen, the bank said “there is still uncertainty about the further evolution of the pandemic,” even if the omicron strain appears to be less virulent. It said last month there was “considerable uncertainty.”

The Oslo-based central bank began raising borrowing costs last September -- the first among the managers of the world’s 10 most-traded currencies -- and policy makers have projected at least three rate increases this year. Norway has weathered the pandemic better than most, helped by record stimulus from the country’s $1.4 trillion sovereign wealth fund.

“No news from the Norges could be good news” for the krone, said Valentin Marinov, the head of G-10 currency research at Credit Agricole SA in London. “The currency could remain supported by its rate advantage as well as the recently elevated energy prices.”

Still, Norway’s currency eased following the announcement, after the central bank also said it would offer so-called F-loans with three-month maturity to provide liquidity. The krone traded 0.3% lower against the euro at 9.9701 at 10:34 a.m. in Oslo.

While the Nordic nation returned to a partial lockdown last month to fight the renewed virus spread, a bigger-than-expected acceleration of inflation and low unemployment have firmed up bets that the central bank will raise rates as much as four times in 2022.

“Based on the Committee’s current assessment of the outlook and balance of risks, the policy rate will most likely be raised in March,” Olsen said. The announcement was an interim decision, with no new forecasts.

With Olsen leaving at the end of next month, his successor at the helm of one of the most hawkish monetary authorities -- with an added task of overseeing the wealth fund -- could be named in coming days after a race mired in controversy.