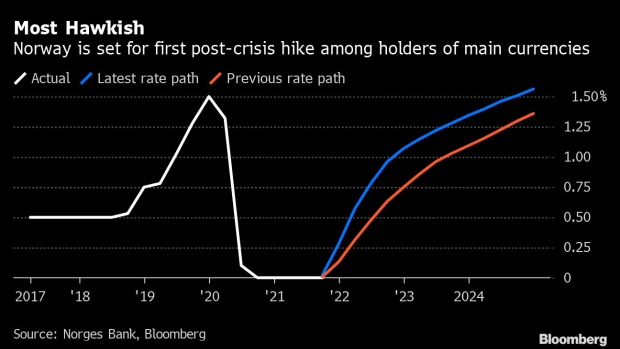 Commuters wait for a tram in the national theatre district in Oslo, Norway, on Wednesday, Sept. 23, 2020. Norway's central bank ruled out an increase in interest rates for the coming years, citing a highly uncertain economic environment due to the ongoing pandemic. Photographer: Odin Jaeger/Bloomberg , Bloomberg

Norway’s central bank is poised to raise its interest rate this week in the first such post-pandemic tightening among nations with the world’s 10 most-traded currencies.

Responding to a buoyant economic recovery, Norges Bank will lift its benchmark on Thursday by a quarter-point from zero, according to all but one of the 15 economists surveyed by Bloomberg. That places it in the vanguard of the so-called Group of 10 after New Zealand policy makers held off from such a move last month.

The decision may also cement the oil-rich economy as the most hawkish member of the pack, contrasting with a more tentative shift expected from the U.S. Federal Reserve on Wednesday toward winding down stimulus. Investors are so certain of a Norwegian increase that they are likely to focus more on signals of further moves next year.

“The September hike is a done deal for sure,” Nordea analyst Dane Cekov said. “It’s all about what the new path signals. If Norges Bank sticks to the current rate path, then I expect Norwegian market rates to fall somewhat.”

Norway’s central bank was an outlier already before the pandemic, thanks to the policy space created by its fossil fuel-powered wealth fund. The fiscal aid it provides has helped the Nordic region’s richest economy on a per-capita basis weather the pandemic with a recovery that has outperformed forecasts.

With output now above pre-crisis levels and the krone trailing central bank projections, the move on Thursday may well presage a whole cycle of tightening.

Governor Oystein Olsen said in June that the bank will deliver 25 basis-point hikes each quarter over the coming year, starting “most likely” in September. Cekov and his colleague Kjetil Olsen at Nordea reckon there is a chance of four increases next year.

While Norway stands out among the G-10, other economies have already acted. Among the most aggressive are Hungary, which on Tuesday delivered a 15 basis-point increase in its benchmark -- a smaller move than expected -- and Brazil, whose central bank is expected to raise by 100 basis points on Wednesday.

The stance of Norges Bank is in stark relief to some of its neighbors in Western Europe. This week, Sweden’s Riksbank refrained from signaling any increases in borrowing costs through its horizon of the third quarter of 2024.

The Swiss National Bank, also due to deliver a decision on Thursday, will almost certainly keep its rate at -0.75%, the world’s lowest. The European Central Bank, which has just dialed down bond-buying, is also maintaining a much more dovish stance, insisting that such a move doesn’t amount to a taper.

Unlike such counterparts, Olsen has managed to avoid resorting to unconventional policy measures such as negative interest rates or asset purchases, because Norway’s $1.4 trillion wealth fund, the world’s largest, has been available to deliver record budget stimulus.

Norges Bank is responding to the pace of the pickup in the economy. Even as weak retail and wholesale trade stifled growth in July more than officials expected, its Regional Network report last week showed overall activity continuing at the same pace over the next six months despite capacity constraints.

Officials view a current bout of inflation as temporary, as an underlying measure declined last month to its lowest level in more than 3 1/2 years. Still, analysts are wondering if higher prices might have an effect on growth.

“It will also be very interesting if Norges Bank discuss the sharp increase in electricity prices and its expected effects on household demand,” SEB’s fixed income strategist Lina Fransson said. “It will likely have some significant effects on private consumption this winter and all else equal indicate a lower rate path.”