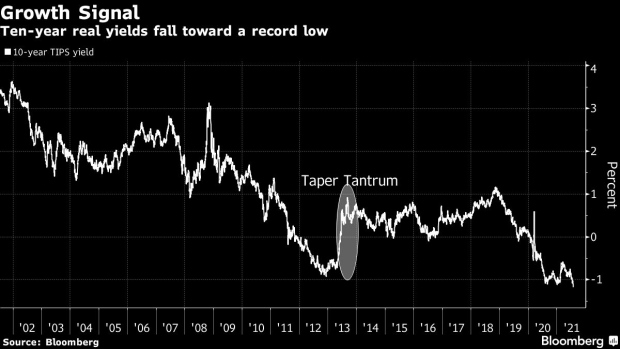 (Bloomberg) -- You’re in good company if you can’t figure out why U.S. Treasury yields are tumbling. Jerome Powell isn’t sure either.

Bonds have relentlessly rallied for months, even as inflation spikes to 13-year highs. Textbooks and Wall Street lore say yields should be jumping instead of diving in the face of that.

The Federal Reserve chairman weighed in on the puzzle when asked about it Wednesday.

“We’ve seen long-term yields come down significantly,” Powell said at a press conference following the central bank’s latest policy meeting. “I don’t think that there’s a real consensus on what explains the moves between the last meeting and this meeting.”

Yields on 10-year Treasuries fell as much as 1.7 basis points to 1.22% following the Fed meeting, extending a drop from the one-year high of 1.77% reached at the end of March. More strikingly, 10-year real yields, regarded by some investors as a proxy for long-term growth outlook, tumbled to a new all-time low of minus 1.17%.

Powell did cite three possible explanations for the recent decline. Some of it was driven by a decline in real yields as the spread of the delta variant raised investors’ concern about a growth slowdown. Meanwhile, investors’ inflation expectations have moderated. And finally, there are the so-called technical factors -- “where you put things that you can’t quite explain,” he said.

Some investors agree that technical factors, such as traders bailing on ill-timed short Treasury bets, have contributed to the yield decline. Others blame the Fed’s monthly purchases of $120 billion in bonds. Worse, some investors even fault the Fed for prematurely signaling plans to reduce stimulus. By moving away from its commitment to the new policy framework of keeping rates low, the Fed ends up cutting the economic expansion short and keeping long-term yields low -- so goes the thinking.

On Wednesday, Powell dismissed the idea that investors are questioning the Fed’s credibility, saying its policy framework is “well understood.” But the “real test” will come down the road when the Fed raises rates, he said.

At Wednesday’s policy meeting, the Fed held interest rates in a range near zero and maintained asset purchases at $120 billion a month. The officials discussed how to go about scaling back bond buying when the time came, but no decision on taper timing has been made.