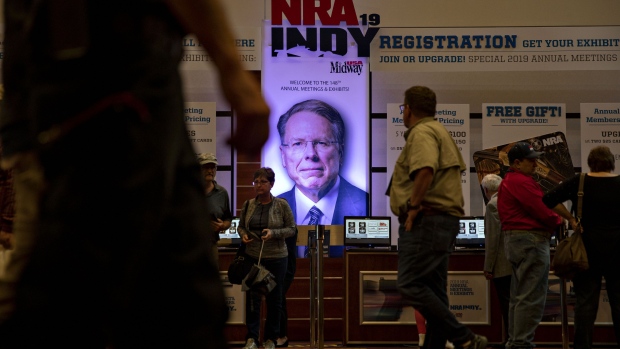 (Bloomberg) -- Wayne LaPierre, the top executive of the National Rifle Association, violated its policies and failed to disclose free overseas yacht trips, the powerful head of the gun-rights group told a federal bankruptcy judge who will decide whether to replace him with a trustee.

Under questioning from a lawyer for New York’s Attorney General, LaPierre defended the use of the yacht calling the trips a “security retreat.” Family members joined him on at least some yacht trips he took annually for six years, LaPierre acknowledged in his testimony in federal court Wednesday.

“It should have been disclosed,” LaPierre told U.S. Bankruptcy Judge Harlin D. “Cooter” Hale during a court fight that could reshape one of the most politically powerful organizations in the U.S.

The NRA boss said that the yacht trips were among several items of value that he failed to disclose from 2013 and 2020, including a hunting trip in Botswana.

LaPierre said he didn’t pay for the hunting trip, but described it as part of the gun-rights organization’s image-building efforts. He filed a disclosure form for the first time in the past few days listing items of value he’d received from people with, or who may be seeking, ties to the NRA.

New York’s top law enforcement officer, Letitia James, is asking a federal bankruptcy judge in Dallas to either appoint a trustee to run the NRA instead of LaPierre, or to throw out its bankruptcy case, which would make it easier for her to seize the group’s assets if she prevails in a New York lawsuit.

Hale repeatedly pressed LaPierre to answer questions from James Sheehan with the state of New York. On several occasions, LaPierre made statements justifying his actions or the actions of the NRA while responding to questions designed to elicit a yes or no answer.

“It would be better if you listened carefully to the question and answer it,” Hale said at one point. In court, witnesses often try to expound on their answers to present additional information.

LaPierre put the gun rights group into bankruptcy a few months after James filed a lawsuit seeking to dissolve the organization. LaPierre said in court that the bankruptcy was necessary to get a “fair legal playing field.”

James filed a lawsuit against LaPierre and the NRA in August after investigating alleged financial misdeeds by the organization’s top executives. The suit seeks to dismantle the NRA and redistribute its $200 million worth of assets to other nonprofits.

At the start of the bankruptcy trial on Monday, NRA attorney Greg Garman defended LaPierre, calling his fundraising prowess irreplaceable. Throwing out the bankruptcy would wrongly expose the NRA to a politically motivated attack on the group’s First Amendment rights, Garman said. And replacing LaPierre would pose an immediate danger to the organization’s future, Garman also said.

Hale isn’t expected to rule until after the trial ends. LaPierre is scheduled to continue testifying Thursday. Both sides will focus on the results of James’s investigation, which concluded the NRA executives illegally diverted tens of millions of dollars away from the group’s charitable mission.

The NRA will acknowledge some lapses in financial oversight, Garman said. But those problems have all been resolved and the people mainly responsible have either left or been dismissed, he said.

The NRA filed its Chapter 11 bankruptcy petition in January as part of a bid to restructure and transfer its charter from New York to Texas. It said at the time that it remained not only solvent but in “its strongest financial condition in years.”

The filing came five months after James sued the group for violating her state’s nonprofit laws. She has since accused the NRA of using bankruptcy in a “bad faith” bid to undercut the New York dissolution case.

The case is National Rifle Association of America, 21-30085, U.S. Bankruptcy Court for the Northern District of Texas (Dallas). To view the docket on Bloomberg Law, click here. Michael R. Bloomberg, founder of Bloomberg News parent Bloomberg LP, is a donor to candidates and groups that support gun control, including Everytown for Gun Safety.