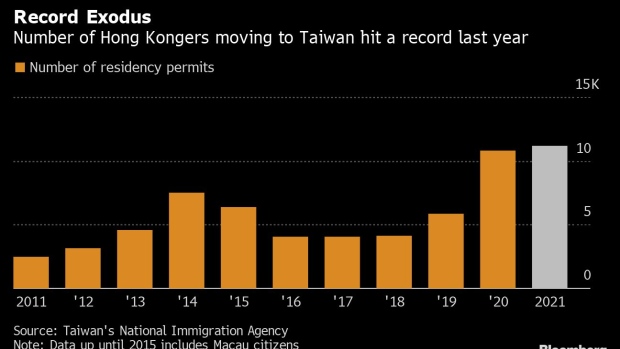 The Taipei 101 building and other buildings are illuminated at dusk in Taipei, Taiwan, on Tuesday, Jan. 26, 2021. Taiwan is scheduled to release gross domestic product (GDP) figures on Jan. 29. Photographer: I-Hwa Cheng/Bloomberg , Bloomberg

(Bloomberg) -- The number of Hong Kong residents moving to Taiwan climbed to a record high, a sign of frustrations over a political crackdown and strict rules to curb the coronavirus.

Some 11,173 Hong Kongers received permits last year to live in Taiwan, up 3.3% from a year earlier, according to new data from the National Immigration Agency in Taipei. That’s the highest figure in official data dating to 1991.

Hong Kong is witnessing an intensifying exodus of locals and expatriates, one that started in 2019 amid pro-democracy protests that sometimes involved violence. The population of the former British colony fell at a record pace in the 12 months that ended in June last year, officially putting it at about 7.39 million.

Hong Kong’s isolation because of the government’s zero-tolerance approach to Covid-19 could last until 2024, fueling large-scale departures of international workers and executives, according to a draft report by the European Chamber of Commerce in the city that was verified by Bloomberg News.

China is also tightening its grip on Hong Kong with a national security law that’s been used to crack down on dissent and a revamp of the election system to ensure only people seen as sufficiently loyal to Beijing hold office.

That crackdown has been expanded to include trade unions, charities, filmmakers and professional associations that engage in what the authorities deem “political” activities. Schools have been overhauling curriculum so that pupils “correctly understand” Chinese history, and learn about the mainland’s constitution, culture and values.

Taiwan plans to make it easier for people from Hong Kong and Macau, a former Portuguese territory, to live and work there. The move would allow individuals who are studying and working in Taiwan extend their residence permits for as long as one year while looking for jobs.

Taiwan’s population fell for a second straight year in 2021, dropping by more than 185,900 from a year earlier to 23.4 million, according to official data. That’s the lowest level since 2013.