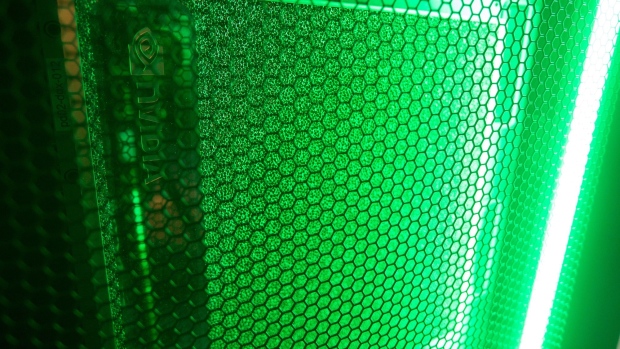 An Nvidia Corp. DGX-2 high performance node component sits behind a cabinet door of the Sberbank and SberCloud Christofari supercomputer during an event to mark its launch into commercial operation inside the Sberbank PJSC data processing center (DPC) at the Skolkovo Innovation Center in Moscow, Russia, on Monday, Dec. 16, 2019. Bloomberg/Andrey Rudakov , Bloomberg

Nvidia Corp. gave a quarterly revenue forecast in line with analysts’ estimates, helped by a surge in spending on internet infrastructure and purchases of computer gaming gear.

Revenue will be about US$3.65 billion in the fiscal second quarter, the Santa Clara, California-based company said Thursday in a statement. That compares with an average analyst estimate of US$3.28 billion. The company’s prediction includes a “low-teens percentage” contribution to revenue from its acquisition of Mellanox Technologies, which some analysts hadn’t included in their forecasts.

Nvidia is the biggest maker of semiconductors that improve video-game play on computers. The company has parlayed that strength into a growing position in data centers, where its chips are well-suited to artificial intelligence work. Owners of data centers are buying more chips and other components to handle an increase in online activity spurred by a large chunk of the world’s population sheltering in place during the COVID-19 pandemic.

Gross margin, or the percentage of sales remaining after deducting the cost of production, will be about 66 per cent in the current quarter, Nvidia also said.The shares were little changed in extended trading following the report. Earlier, they closed at US$351.01 in New York. The stock has surged 49 per cent this year.

Beyond gaming and AI, Huang is targeting the market for self-driving vehicles, which require similar chip capabilities. Still, the majority of sales come from PC gaming, where Nvidia’s graphics chips create the most realistic experiences.

Profit in the fiscal first quarter was US$917 million, or US$1.47 a share, compared with US$394 million, or 64 cents US a year earlier. Revenue surged 39 per cent to US$3.08 billion and profit excluding certain costs was US$1.80 a share in the period, which ended April 26, the company said. Analysts, on average, had predicted earnings of US$1.69 a share on sales of US$3 billion, according to data compiled by Bloomberg.