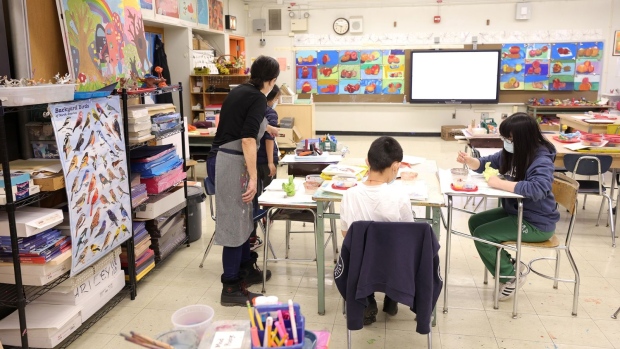 (Bloomberg) -- New York City Mayor Eric Adams said he is considering a temporary remote option for the city’s public schools, in a stark reversal of his position to keep kids learning in person despite a surge in Covid cases.

“If we are able to put in place a temporary remote option” then the city will do that, he said during a press briefing on Thursday.

New York City schools have remained open throughout the entirety of the school year. Adams and schools chancellor David Banks have pushed for schools to remain open, citing the benefits to in-person instruction for high need students, as well as reliable food and shelter for low-income students.

Some parents, teachers and students have complained about the lack of sufficient testing, building ventilation, and the increase in pediatric Covid cases. The issues sparked a walkout earlier this week by Brooklyn Technical High School students Tuesday, one of the city’s largest and most prestigious public schools.

The city’s schools, like much of the public-sector workforce in New York, have also faced worker shortages. Without teachers, some schools have resorted to corralling students in auditoriums for study periods instead of classroom instruction.

“The safest place is in school and I’m going to continue to push that,” Adams said. “But we have to be honest. A substantial number of children’s parents aren’t bringing them to school. I have to make sure children are educated.”

During the latest spike in omicron cases, attendance has dipped citywide. Roughly 70% of the city’s 1 million students have been attending classes since schools reopened after the winter break. On Wednesday, attendance was about 76%, according to city data.

Adams’s decision to entertain a temporary remote option comes as school tensions rise across the country. Disruptions due to Covid-19 peaked during the first week of January, and a labor dispute in Chicago led to school closures for five days. The issue has drawn the attention of the Biden administration, which has pushed to keep schools open as a way to prop up the economy.

Adams said he is “willing to sit down with the UFT to entertain that option,” referencing the city’s teachers union, the United Federation of Teachers.

In a statement, UFT President Michael Mulgrew said “We have long called for an instructionally sound remote option and have been speaking directly to the Mayor about creating one, a program that will work for students.”