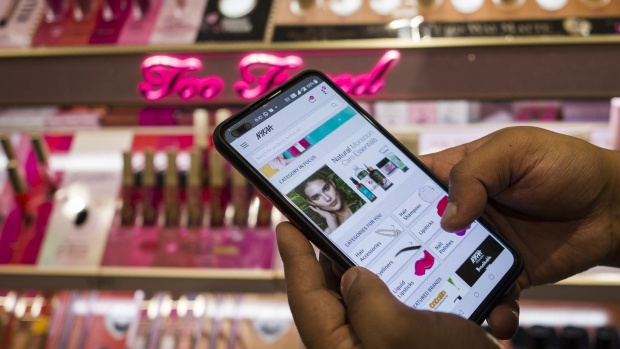 An employee demonstrates the Nykaa application at one of the company's stores in New Delhi, India on Saturday, July 30, 2021. Nykaa has grown into India's top e-commerce site for beauty products, with the endorsement of Bollywood stars and a fervent following among twenty-somethings. The startup filed preliminary documents on Aug. 2 for an initial public offering, which Bloomberg News has reported could value the business at more than $4 billion. , Bloomberg

(Bloomberg) -- FSN E-Commerce Ventures, the formal entity that operates Indian beauty startup Nykaa, got about 60 times more bids from anchor investors than it intended to sell in its initial public offering, according to people with knowledge of the matter.

The Mumbai-based firm received bids worth about 1.5 trillion rupees ($20 billion) from large funds compared with almost 24 billion rupees ($320 million) offered, the people said, asking not to be identified as the information is private. The Government of Singapore was the single largest of the lot, subscribing to 2.6% of the anchor book, followed by Canada Pension Plan Investment Board with 2.4% and Tiger Global with 2.3%, while Fidelity funds bought a combined 6.3%, according to an exchange filing from Nykaa late Wednesday.

The interest follows one of the world’s most blistering stock-market rallies this year, as a string of consumer-tech unicorns line up to list on India’s public markets. Paytm, the digital payments firm backed by China’s Ant Group Co., opens its share sale Nov. 8 in what will be the nation’s biggest IPO so far.