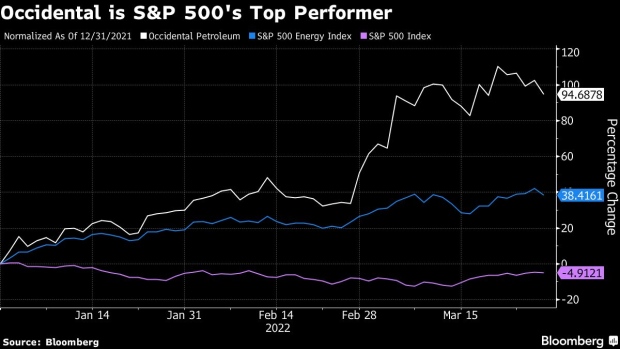 Signage is displayed outside of Occidental Petroleum Corp. headquarters in Carlsbad, New Mexico, U.S., on Friday, Sept. 11, 2020. With the U.S. oil industry reeling from the collapse in demand this year, the New Mexico shale patch has emerged as the go-to spot for drillers desperate to squeeze as much crude from the ground without bleeding cash. There’s just one problem: Joe Biden wants to ban new fracking there. , Bloomberg

(Bloomberg) -- Fueled by its leverage to rising oil prices and a big boost from the world’s top investort, Occidental Petroleum Corp. doubled this quarter and is the best performer in the S&P 500.

It is quite a turnaround for the oil explorer, which has struggled for years. The shares soared 101% over the last three months, marking the best quarter in the company’s history, as oil leaped over $100 a barrel. The next closest stock in the S&P 500 Index in the first quarter was Halliburton Co. with a 70% jump.

“I don’t think there’s a precedent for this,” Cowen & Co. analyst David Deckelbaum said in an interview.

On Wednesday, Raymond James analyst John Freeman raised his target for Oxy to $85 from $60, setting a new Wall Street high for expectations on stock. The average price target is $60, and the shares are trading for around $58.

The list of first-quarter winners in the broad market benchmark is filled with beneficiaries of oil’s surge, with Halliburton, Marathon Oil Corp., APA Corp. and Baker Hughes Co. all rising more than 50%. But the main reason for Oxy’s outperformance goes beyond crude prices to the company’s ability to return cash to shareholders.

“Everything did go right,” Susquehanna analyst Biju Perincheril said in an interview. “It was a very good set up for them.”

Perincheril said he can’t remember the last time a large-cap oil producer doubled in such a short amount of time, but it’s more common for small-cap producers. He said Oxy’s bumper quarter was fueled by a big bet on the firm from Warren Buffett, a dividend boost, promises of a $3-billion share repurchase plan, ESG initiatives and -- of course -- a run-up in oil prices past $100 per barrel.

The skyrocketing share price -- Oxy is the first S&P 500 company to double in a single quarter since L Brands did so in 2020 -- even surprised some bullish analysts.

“The sheer magnitude, from the Q4 earnings print till here, was a bit unexpected,” Tudor Pickering Holt analyst Matt Portillo said in an interview of the stock’s massive gains, which he attributes to debt cutting.

Occidental used to be “the undisputed leader in share distributions” among oil and gas companies, Morningstar analyst David Meats said in an interview. That changed in 2020, when Oxy’s debt problems forced it to repeatedly cut its dividend, ending at a penny per share.

Since then, the company has used proceeds from high oil prices to pay down its debt. Oxy is now set up to have a “top of the pack” discretionary free cash flow yield, meaning “they have the potential to be the leader (in cash payouts) once again,” Meats said.

A decent chunk of Oxy’s first-quarter gains came from crude’s 40% rise in the period. But the shares also got a high-profile boost in mid-March when Warren Buffett’s Berkshire Hathaway Inc. revealed an increased stake in the company. The stock was already leading the S&P with a 51% gain in the first two months of the year, but the Buffett news clearly gave them some additional juice.

Occidental has been on an incredible run since the start of 2021, rising 225%. That’s more than twice the 100% return of the S&P 500 energy sector and quite a reversal of fortune after being the sector’s worst performer from the start of 2019 to the end of 2020. The turnaround is largely due Oxy’s unhedged crude production, which made it “one of the most levered names to the increase in oil prices,” KeyBanc analyst Leo Mariani said in an interview.

In addition, Mariani noted that the company is looking to build 70 carbon capture facilities, an effort that should appeal to ESG investors. It also increased its dividend by 1,200% and announced a $3 billion share buyback program.

That said, Oxy will be hard pressed to maintain its surge, especially as oil prices have retreated from a recent peak of $130 per barrel. The average analyst price target on the stock is $57.52, which is less than 2% higher than where it currently stands.

So the key keeping this rally going may be in Omaha. As Mariani said, even if oil prices have peaked, Oxy shares could rise further “if we see Buffett continuing to buy aggressively.”