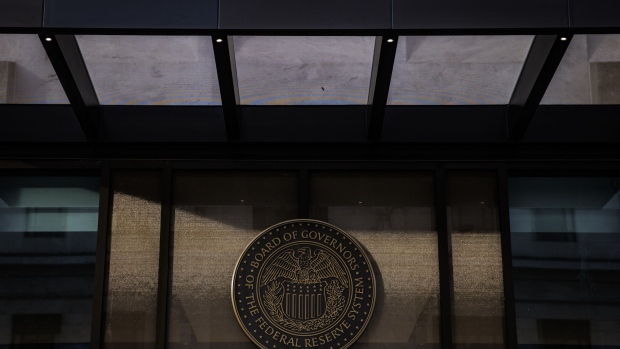 The seal of the Board of Governors of the U.S. Federal Reserve in Washington, D.C., U.S., on Saturday, Nov. 20, 2021. The Federal Reserve looks on course to consider a more rapid drawdown of its mammoth bond-buying program just weeks after it instituted a plan to scale the purchases back in a methodical manner. Photographer: Samuel Corum/Bloomberg , Bloomberg

(Bloomberg) -- Rogue bets that Federal Reserve policy rates might actually drop below zero are once again being made as the onset of the omicron variant of the coronavirus casts doubt on the economic outlook.

Eurodollar contract open-interest data from CME Group Inc. show  a couple of new trades on what remains an unlikely scenario -- a negative fed funds target by September 2022 -- although the market’s base case remains around two quarter-point benchmark hikes next year. But the re-emergence of this kind of hedging underscores the risk to the central bank’s tightening path.

Money markets have dialed back their expectations for Fed hikes, which before the emergence of the latest major coronavirus variant had risen to include as many as three quarter-point increases for 2022. The move in central-bank bets has been mirrored across global markets, and Treasury yields across the curve have dropped as investors flock to safer assets. The bond rally took a brief breather on Monday, but was once again in full flight on Tuesday.

The bets on negative-rate hedging showed up in CME data released after Monday’s session, with open interest rising in several September 2022 eurodollar options with call strikes above 100 -- which equates to a negative yield. That reflects flows on Monday which, according to traders familiar with the matter, saw some 20,000 contracts bought across the two call strikes.

The move came ahead of congressional testimony by Fed chief Jerome Powell, who appears before lawmakers Tuesday.  In written remarks Monday, he said the omicron variant poses risks to both sides of the central bank’s mandate to achieve stable prices and maximum employment.