Oil gains accelerated in tandem with a broader market rally, continuing a pattern this week of prices gyrating around US$60 a barrel.

Futures in New York rose as much as 4.5 per cent, though market volatility has eased somewhat after rising to the highest since November this week. The Suez Canal remained blocked, with efforts to dislodge a massive container vessel expected to take until at least Wednesday. The impact on headline prices was muted.

“There’s certainly a floor under this market, not too far below US$60 for WTI,” said John Kilduff, a partner at Again Capital LLC. “There’s still the reopening narrative out there in the market. To the extent we get sufficient immunity out there, then we could have a heck of a summer driving season.” 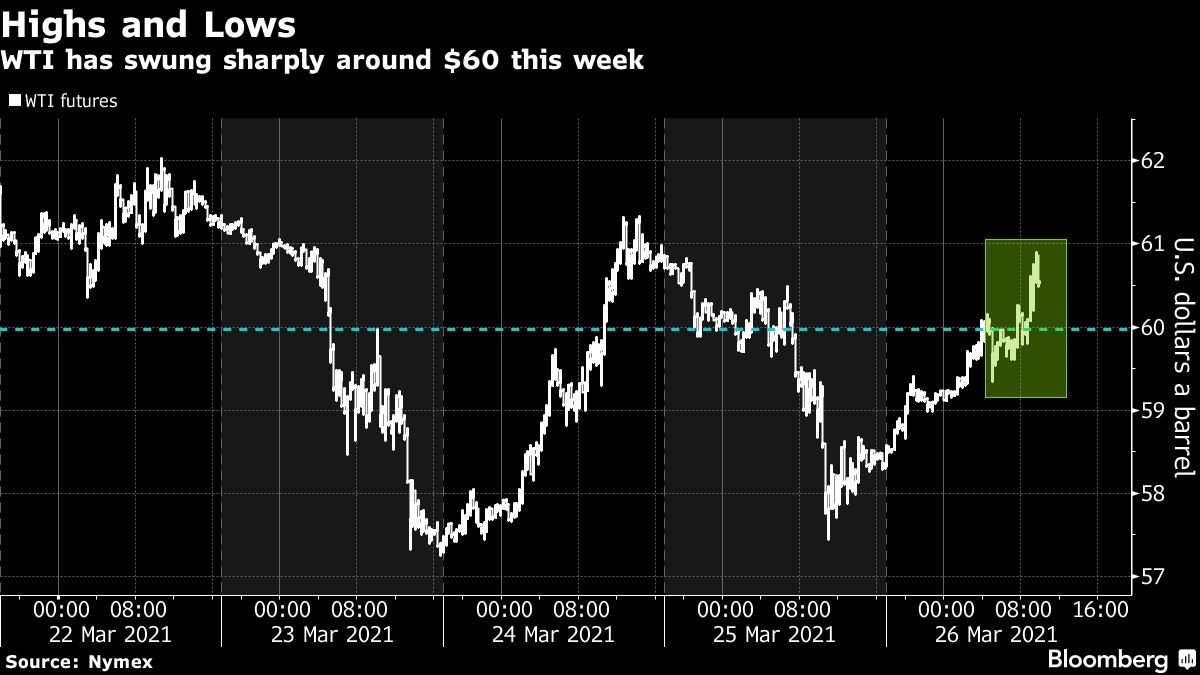 Following the grounding of the Ever Given ship on Tuesday, shipping rates have increased and hundreds of vessels have backed up in the canal. Yet the impact on the oil market is likely smaller than it would have been in the past, with flows from the Middle East to Europe declining due to a long-term realignment of trade. And while plenty of oil is shipped from the North Sea to Asia, it’s usually carried on tankers that are too large to pass through the canal.

Nevertheless, “the last days feel like oil investors are on a rollercoaster,” said Giovanni Staunovo, a commodity analyst at UBS Group AG. “Drops are followed by a rise the day after, with fundamental news not being able to explain those shifts.”

The prompt timespread for global Brent crude flipped briefly into a bearish contango on Tuesday. It’s now back in a bullish backwardation structure -- where near-dated contracts are more expensive than later-dated ones -- pointing to tightening supplies.

Oil has sold off recently amid softening physical demand, a stronger dollar and the unwinding of long positions, while combined open interest in WTI and Brent has fallen over 6 per cent in the past two weeks to the lowest since January. Yet prices are still up more than 20 per cent this year and there’s confidence in the longer-term outlook as vaccination rates climb and OPEC+ keeps supply in check. The group meets next week to decide on its production policy for May.

“With another uncertain OPEC+ meeting around the corner, increasing Iranian supply coming into focus and U.S. shale recovered from the Texas freeze, volatile markets are set to remain for the time being,” TD Securities commodity strategists led by Bart Melek said in a note.