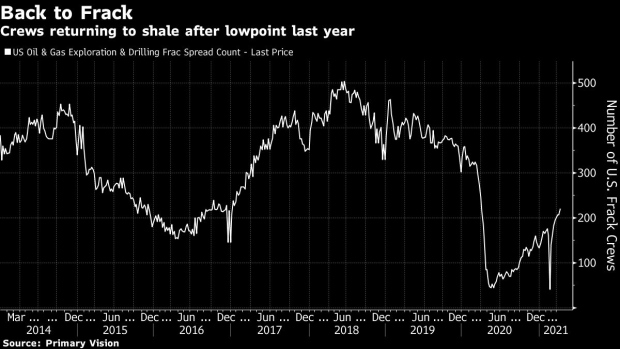 (Bloomberg) -- Billionaire Alejandro Bulgheroni’s dream of making fracking more environmentally friendly is running up against the reality of shale-patch economics.

The Argentine oil tycoon has pumped about $250 million into developing the technology behind Evolution Well Services, a Texas-based company that makes fracking equipment powered by natural gas produced at drillers’ wells instead of diesel that has to be trucked into fields. EWS has been in business for five years and has deployed seven crews in the U.S., well below its expectation of about 20 by now even as companies push to cut carbon footprints.

EWS’s conundrum illustrates the obstacles for so-called electric fracking, which faced concerns about costs even as it started gathering steam in earnest about two years ago. While the shift may cut costs in the long run, the industry is working through a glut of diesel-powered machinery, and is still grappling with the effects of the virus pandemic that sapped fuel demand and sent oil prices to historic lows last year, making companies reluctant to spend.

“Big companies have a large investment in this old technology, and they don’t want to or can’t make the switch until they finish amortizing their equipment,” Bulgheroni said in an interview. “As long as it’s an economic problem, it’s going to be very difficult to change.”

Frack crews have been returning to work over the past year, but they still total less than half the number at the height of the boom in 2018.

Bulgheroni, who made billions drilling for oil and gas over the last four decades and has built a wine venture on the side, still thinks the business can be successful as companies begin executing their environmental, social and governance plans. He said the EWS method prevents the burning of about 5 million gallons of diesel annually per frack crew. Last year, CNX Resources Corp. said it saved $2.4 million in fuel costs at one of its pads using EWS equipment.

A conventional fracking job involves using about 20 giant and noisy diesel-powered pumps, each the size of an 18-wheeler trailer, with fleets operated by a crew of about 30 people. In e-fracking, a small-diameter gas pipeline shuttles the fuel from the well to a turbine powering an electric motor. Bulgheroni said his firm’s equipment can be operated with about half the staff of the conventional method.

Almost 10% of the roughly 200 frack fleets in the U.S. are powered by electricity rather than the conventional diesel engines, according to industry data provider Lium LLC. As many as 10 more fleets may be in the works, Daniel Cruise, a partner at Lium, wrote in an email.

But the price tag is holding back e-fracking. The estimated cost to buy a new conventional frack fleet is around $40 million, while the price for an electric equivalent is roughly 50% more, according to Lium. EWS’s equipment costs $50 million to $55 million, Bulgheroni said. It’s a tough pill to swallow for explorers and producers who have been hammered by investors to dial back spending and return more profits to shareholders.

“The biggest challenge for e-fleets so far has been the cost,” Cruise said. “Most E&Ps are still very cost sensitive and not yet willing to pay the (much) higher price needed to compensate for newbuilds.”

“Capital austerity between producers and servicers alike makes it difficult to see mass migration toward e-frac,” analysts at JPMorgan including Sean Meakim wrote in a note. “Instead, we continue to view dual-fuel as the most economic bridge to an electric fleet in the long run.”