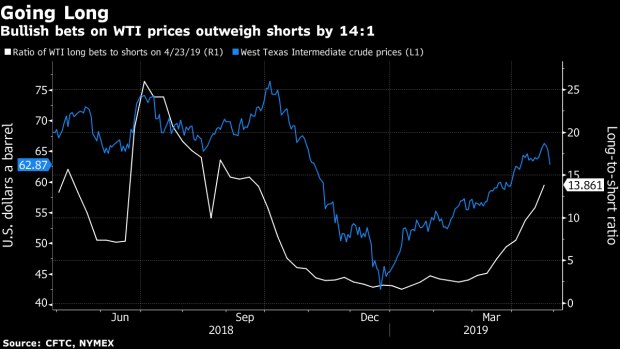 (Bloomberg) -- Oil is on its longest bull run in 13 years, fueling a rally that has U.S. President Donald Trump fretting about higher prices.

Hedge funds have increased bullish sentiment on U.S. crude prices for the last nine weeks, the longest such run since 2006, according to data released Friday. Almost 14 times as many bets have been placed on prices going up as on a decline, as investors see supply threats multiplying around the globe.

Gasoline prices have risen in tandem this year, and Trump on Friday said that he has pressured OPEC to boost output to reverse the trend. That helped stall a rally that drove oil to a six-month high, partly due to tightened U.S. sanctions against Iran. But the ebullient tilt in speculative wagers suggested a correction was likely no matter what, said Phil Flynn of Price Futures Group Inc.

“The market is so bulled up right now," said Flynn, a senior market analyst. “There’s been a lot of hedge fund buying, a lot of speculative interest, and we probably need to hit the pause button for now."

The net-long WTI position -- the difference between bets on higher prices and wagers on a drop -- rose 3.6 percent to 314,387 futures and options contracts in the week ending April 23, the U.S. Commodity Futures Trading Commission said. Long positions edged up 1.7 percent, while shorts declined 18 percent.

To contact the reporter on this story: Alex Nussbaum in New York at anussbaum1@bloomberg.net

To contact the editors responsible for this story: Simon Casey at scasey4@bloomberg.net, Reg Gale, Joe Carroll