For energy companies still in Russia, it's not a 'pull the plug and leave' situation: Analyst

Oil climbed back above US$100 a barrel as the Kremlin cast doubts on the progress of current peace talks with Ukraine and investors weighed the absence of Russian barrels in a tight market.

Futures in New York closed up 8.4 per cent on Thursday to settle at US$102.98. Markets rallied after a Kremlin spokesman said a report of major progress in negotiations over Ukraine was “wrong,” but that discussions will continue. The war has severely disrupted Russian oil flows, and the International Energy Agency predicted output from the key OPEC+ member will decline by about a quarter in April. Three cargoes were dropped from Russia’s planned March loadings.

Global benchmark Brent settled above US$106 barrel, swinging by more than US$5 intraday for 16 consecutive sessions -- the longest such run ever.

“To say that oil prices have been volatile recently would be an understatement,” Morgan Stanley analysts Martijn Rats and Amy Sergeant wrote in a note, boosting their forecast for third-quarter Brent prices by US$20 to US$120 a barrel. “It will likely become progressively more difficult for Russia to maintain its seaborne exports in the coming months.” 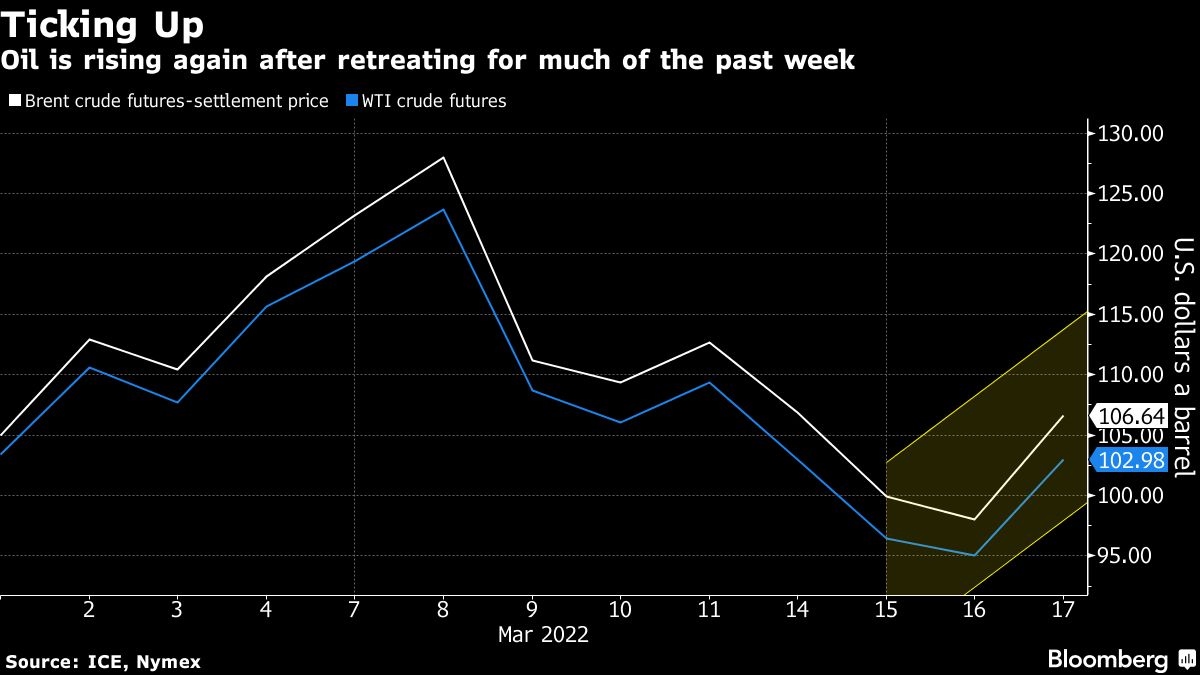 Investors are also monitoring a virus resurgence in China. Traffic congestion levels in partially locked-down Shanghai are more than a third lower than a year ago and there are also restrictions on movement in the manufacturing hub of Shenzhen and in Jilin province.

Rapid developments in the war in Ukraine and the ensuing sanctions on Russia are driving enormous fluctuations in the market, and holdings in oil contracts have slumped due to the volatility. Libya said Wednesday that OPEC should ramp up supply faster to ease the energy crisis. On Thursday, Saudi Arabia’s Crown Prince Mohammed bin Salman told the Japanese Prime Minister that the kingdom is keen to maintain the oil market’s balance and stability, state-run SPA reported.

Adding to the oil market’s volatility is a liquidity crunch, leaving prices vulnerable to big swings. The extent of the liquidation shows up in open interest figures. Holdings for WTI fell to the lowest since 2016, while those for Brent were the lowest since 2015.