Oil prices are projected to be lower in the future: Portfolio manager

Futures in New York settled 2.5 per cent lower, after trading in a US$9 range on Thursday. On a day with few new developments from either OPEC+ or the war between Russia and Ukraine, broader market moves came to the fore front, with oil tracking its typical inverse relationship to the dollar. As the dollar rises today, commodities priced in the currency become cheaper. On Thursday, the foreign ministers of Russia and Ukraine met in Turkey but the meeting failed to yield any results.

Oil “is starting to edge lower as investors become concerned that stagflation risks could deliver a big hit to the short-term crude demand outlook,” said Ed Moya, senior market analyst at Oanda. “The latest inflation report showed everything got more expensive and the war in Ukraine will likely keep this upward trajectory in prices well into the summer, which could lead to crude demand destruction.”

The market has swung wildly for much of this week, rocked by developments such as the U.S. ban against Russian imports and what looked to be the first signs of disunity in OPEC+. The United Arab Emirates called on the group Wednesday to boost output faster than planned. The nation’s energy minister appeared to temper that message a few hours later. OPEC+ has resisted calls from consumers to pump more, arguing that the surge in prices is driven by geopolitical tensions rather than a supply shortage. 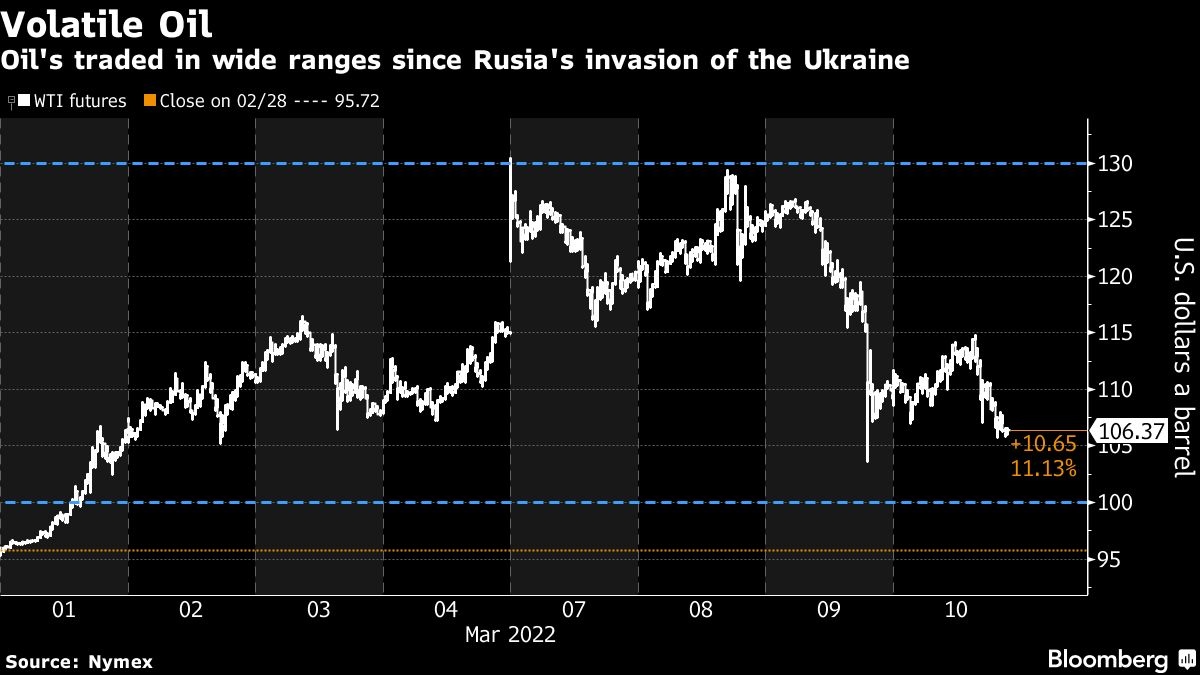 Oil skyrocketed earlier this week to the highest since 2008, in part due to fears that the loss of Russian flows may stretch an already tight market. Prices also surged as the U.S. moved to ban Russian imports, which if followed by other Western nations, could see crude hit US$240 a barrel this summer, according to Rystad Energy. Still, the heads of OPEC and Chevron Corp. said there’s no shortage of oil, while Iraq insisted there’s no need to ramp up output more than planned.

The invasion is reverberating through refined products markets as well, with diesel in Europe and the U.S. seeing unprecedented swings this week. Retail gasoline prices on both sides of the Atlantic have jumped to records in recent days.

In a further sign of the strain on global diesel markets, Saudi Arabia was seeking to purchase an unusually large amount of the fuel, in a surprise move for a country that is usually a net exporter. Stockpiles of distillate fuels in the U.S. also fell sharply last week.