Oil declined by the most in two weeks in the wake of growing U.S. inventories and after Russia signaled it is ready to help ease a global energy crisis.

Futures in New York slid 1.9 per cent on Wednesday and extended declines late in the session after the Financial Times reported that the U.S. is raising the prospect of releasing emergency oil reserves. Prices were weaker with U.S. government data showing growing crude stockpiles and amid Russian President Vladimir Putin’s indications that the country will ramp up gas exports to stabilize energy markets.

“The consideration of tapping reserves in the U.S. is likely to signal that we are not going to see oil prices get out of hand,” said Ed Moya, senior market analyst at Oanda Corp. 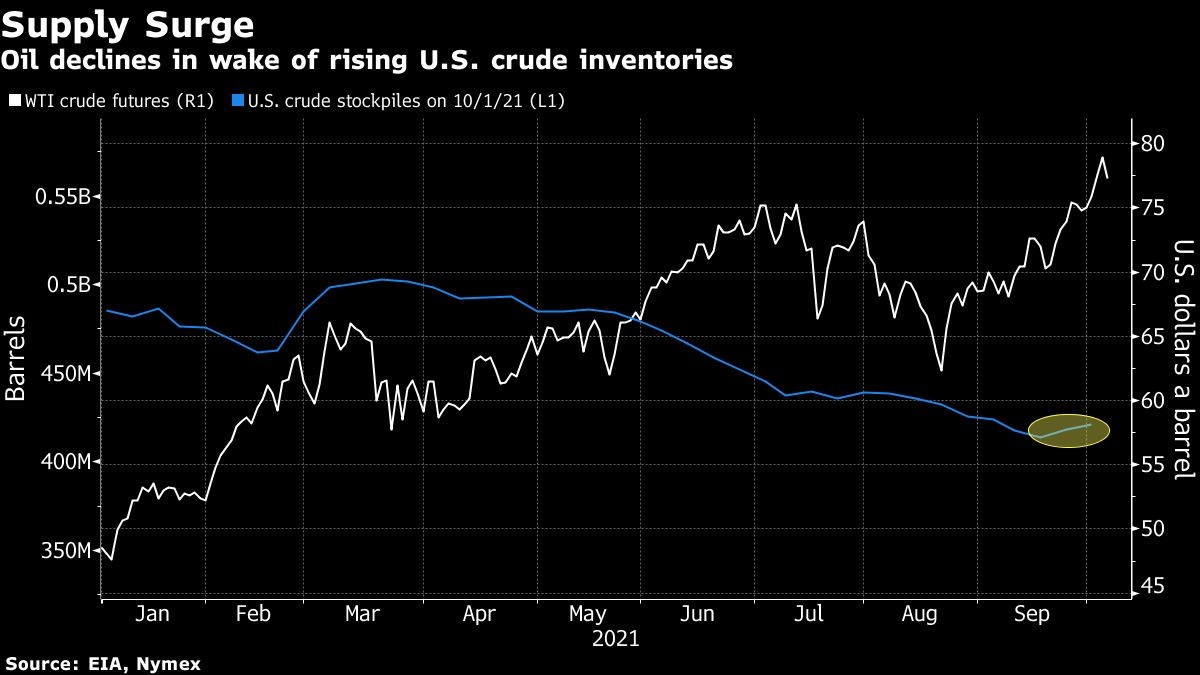 Oil closed at the highest since 2014 on Tuesday as surging natural gas prices spur greater demand for crude and oil products ahead of winter, while OPEC+ continues to only drip-feed additional supply into the market. In the days leading up to the group’s Monday meeting, the Biden administration had made a push for producers to boost crude output amid intensifying fears about tightening global energy supplies.

U.S. energy secretary Jennifer Granholm raised the prospect of releasing crude oil from the strategic petroleum reserve and said that “all tools are on the table,” the Financial Times reported, citing comments made at an energy summit on Wednesday. Granholm did not rule out a crude oil export ban, the FT said.

Exports from Russia’s Gazprom PJSC to Europe in the first nine months of the year were close to all-time highs, according to the company. If that pace is sustained for the rest of 2021, it would be a record year, Putin said at an energy meeting on Wednesday. Lower-than-anticipated supplies from Russia, the region’s largest supplier, have been a major cause of the crisis, according to some European officials.