Oil slid for a sixth straight week, marking the longest stretch of weekly declines since 2018, as the omicron variant jolts markets and OPEC+ continues to hike supply.

West Texas Intermediate crude futures fell 2.8 per cent this week. The spread of the omicron variant has investors concerned about any potential hit to demand as the U.S. reported at least six states with cases. COVID-19 infections in South Africa have almost quadrupled since Tuesday. Meanwhile, OPEC and its allies this week decided to add 400,000 barrels a day of crude to global markets in January, ultimately bowing to consumer pressure.

“The short-term demand outlook was shaky at best and if the U.S. sees new restrictions, the oil market could see a supply surplus by the end of the month,” said Ed Moya, senior market analyst at Oanda Corp. 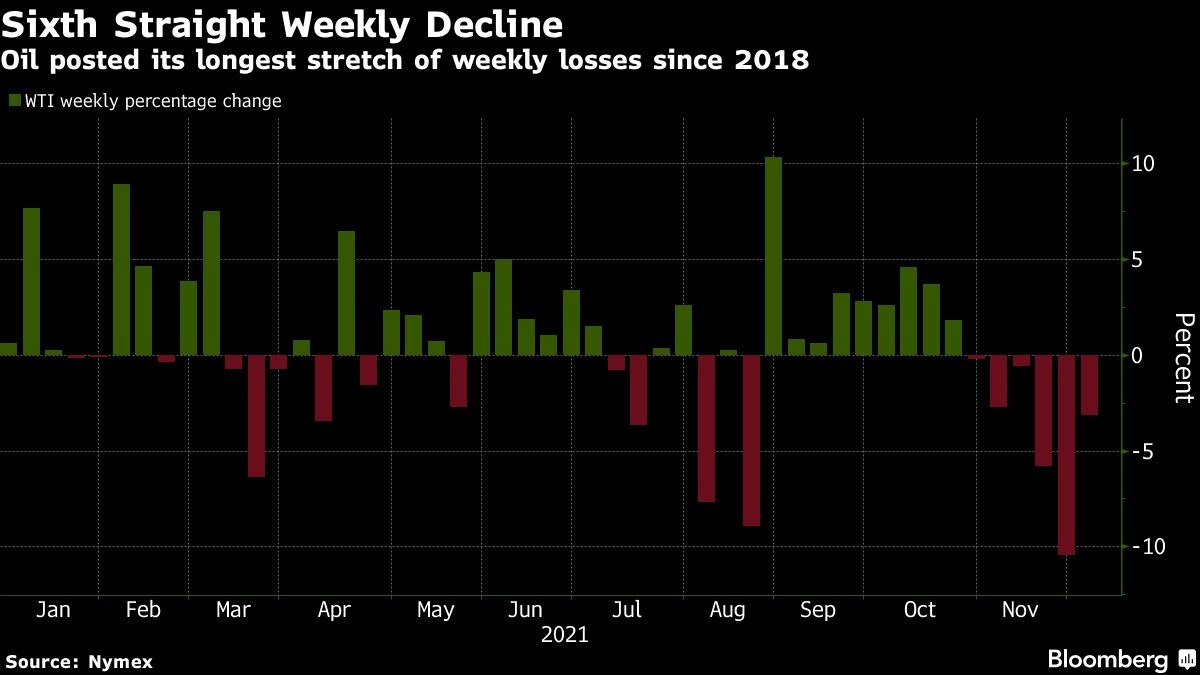 Crude has dropped sharply since late October amid moves by major consuming nations to tap their reserves and the emergence of the new virus variant. A more hawkish Federal Reserve was put in a tough spot Friday as U.S. jobs data missed expectations. Meanwhile, the sharp increase in volatility has oil traders heading for the exit, with open interest across the main oil futures contracts plunging to its lowest level in years.

While OPEC+ decided to continuing supplying the market with barrels, the group essentially placed a floor under prices by giving itself the option to change the plan at short notice. Prior to this week’s meeting, ministers indicated they were concerned about the impact of omicron on crude demand but were struggling to figure out how serious the new strain would become. By effectively keeping its monthly meeting open, the alliance now has more flexibility to address price swings.

Meanwhile, in Vienna, diplomats attempting to restore the nuclear deal between Iran and world powers face substantial challenges that need urgent solutions, the top European envoy said Friday. Talks are set to resume in the middle of next week.