Oil surge has so many angles, including loss of vital technical help for Russia

Oil rallied higher after President Joe Biden announced the U.S. would ban imports of Russian energy, while the U.K. said it would phase out Russian products by the end of this year.

West Texas Intermediate gained 3.6 per cent to settle over US$123 a barrel while Brent added 3.9 per cent. The U.S. announced a ban of Russian fossil fuels on Tuesday. The U.K. said it phase out all imports of Russian oil. The country will continue to allow natural gas imports from Russia. So far, they are the only two countries to impose an outright ban. Europe is likely to face the brunt of the current commodity crisis, said Goldman Sachs analysts Jeff Currie in a report, with the Russian crisis threatening a 1970-s style energy shock.

The formalized sanctions imply a “drawn out conflict” and will have “massive implications” for the energy market long term, said Rebecca Babin, senior energy trader at CIBC Private Wealth Management.

The surge in oil has helped push retail fuel prices around the world higher. Gasoline is at a record in the U.S., according to the American Automobile Association and European diesel prices have also rocketed, underscoring the inflationary impact of higher energy costs. 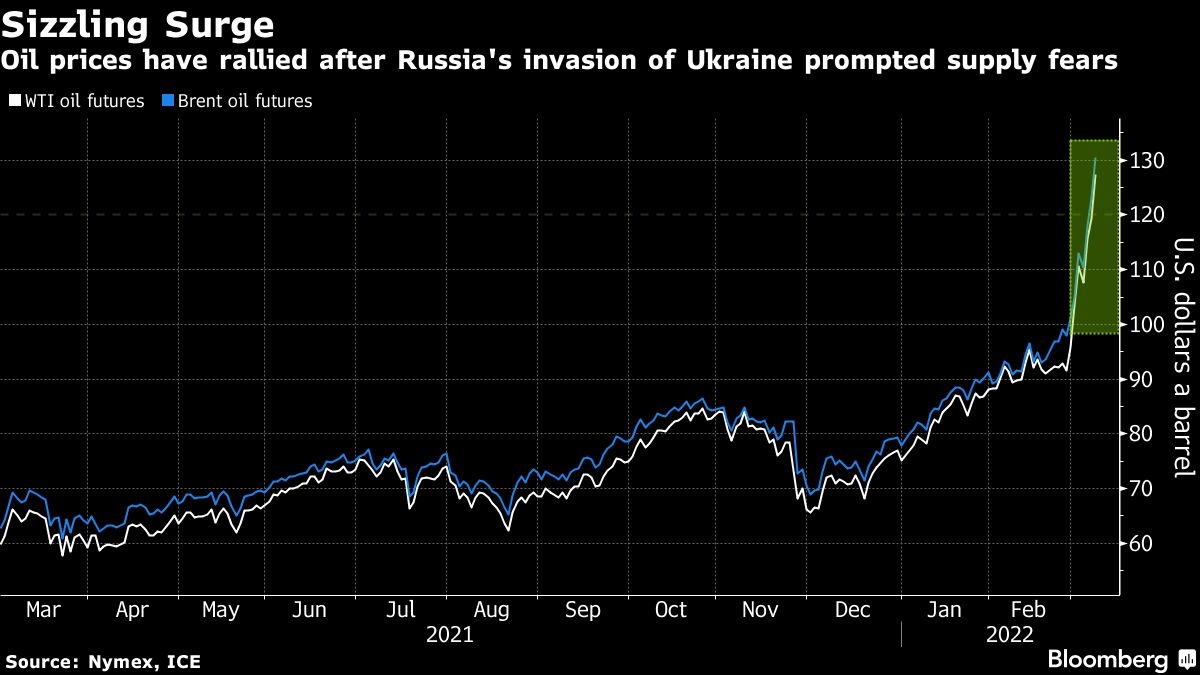 Oil’s rally since Russia invaded the Ukraine has caused some of the main names on Wall Street to lift their price forecasts. JP Morgan & Co. said Brent could skyrocket to as high as US$185 by the end of this year if current conditions continue. Goldman Sachs Group Inc. now sees Brent at US$135 this year, up from US$98 previously, adding that demand destruction is the only way to buffer high prices.

“We are getting to the kind of prices today that are encroaching upon the area of demand destruction,” Lance said in an interview with Bloomberg Television on Tuesday.

Oil’s volatility remains at the highest level since crude plunged into negative trading, with both benchmarks trading swinging about US$12 a barrel Tuesday.

The head of the IEA said that the agency can release additional supplies to cool prices if it needs to, and that it was disappointed by the actions of producers to stabilize crude so far.

OPEC Secretary General Mohammad Barkindo warned that the world doesn’t have sufficient oil-production capacity to replace Russia’s contribution to crude markets, according to remarks at CERAWeek by S&P Global in Houston. At the same event, Chevron Corp. Chief Executive Officer Mike Wirth said that there’s no evidence of physical oil or gas shortages yet.

Shell also said it will stop buying Russian crude on the spot market and will not renew its term contracts, unless directed by governments to do otherwise. It will change its crude oil supply chain to remove Russian volumes, though this could take some weeks, and will lead to reduced throughput at some of its refineries.

Some cracks are starting to show across oil markets as soaring costs begin to bite. Plastic makers in Asia are reducing activity, while refiners in the region are considering cuts to processing. Freight rates have surged, adding to increasing pressure on refiners that had just recovered from the pandemic.

Diesel remains the corner of the market that’s showing the most extreme tightness -- particularly in Europe. Traders are paying a premium of more than US$100 a ton for ICE gasoil futures relative to the April contract, an unprecedented level. Crude benchmarks also remain heavily backwardated.