Futures in New York edged lower, closing below US$87 a barrel. Domestic crude stockpiles rose last week for the first time in eight weeks, according to an Energy Information Administration report. Despite the mixed picture on overall inventory figures, U.S. demand shows signs of still running hot. The total volume of oil products supplied to the market was the highest for the time of year in at least 30 years.

“We might have some price shocks higher in the near term,” said Quinn Kiley, a portfolio manager at Tortoise, a firm that manages roughly US$8 billion in energy-related assets. But by the second half of this year, or early 2023, “we are going to see supply respond to meet that increased demand and have a more balanced market.”

In the meantime, the U.S. will work to accelerate the release of strategic reserves, White House National Economic Council Director Brian Deese told Bloomberg TV. However, Biden’s options to address the rally are limited and likely short-lived. Crude’s recent surge poses a challenge for consuming nations and central banks as they try to stave off inflation while supporting economic growth. 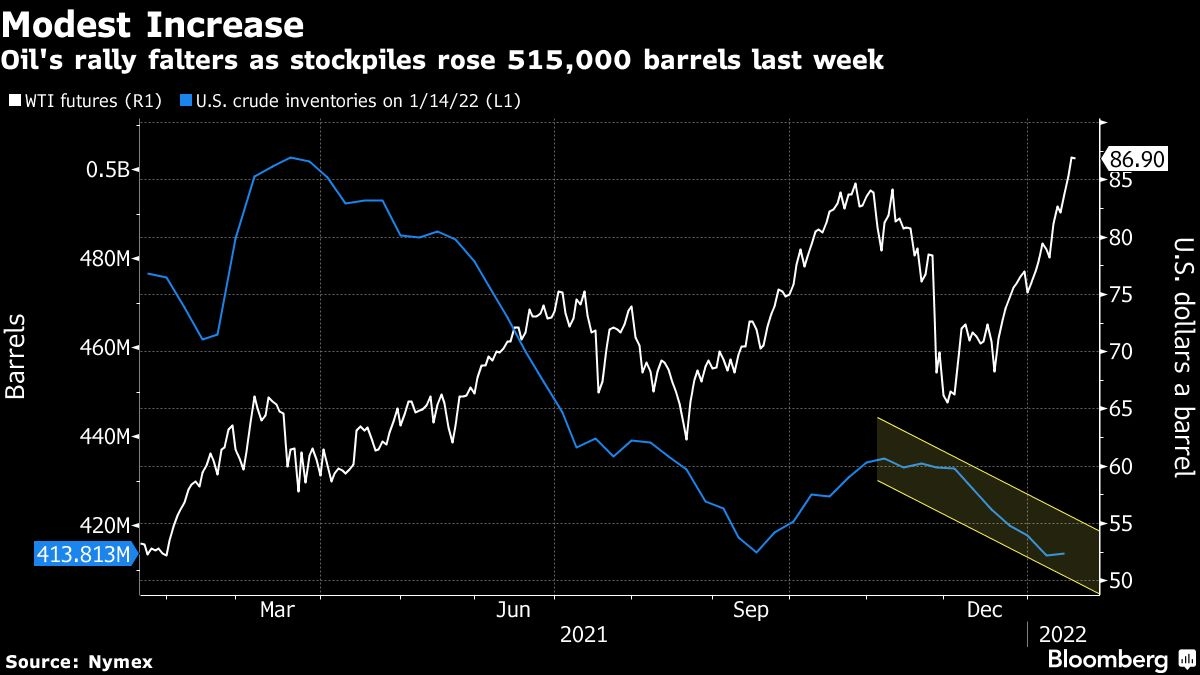 Oil has surged since the end of November as stronger-than-expected demand and supply outages tightened the market. Goldman Sachs Group Inc. is forecasting a return to US$100 crude in the third quarter, while the International Energy Agency said consumption is on track to hit pre-pandemic levels.

“Underlying fundamentals remain strong as confirmed by the IEA in their monthly report,” said Ole Hansen, head of commodities strategy at Saxo Bank. “But with technical indicators flashing overbought, a period of consolidation may soon emerge.”

The report from the U.S. Energy Information Administration also showed gasoline stockpiles rose 5.87 million barrels, and the the four-week rolling average for demand fell to the lowest level since March. This is consistent with the seasonal demand lull, along with cold weather and ongoing movement restrictions curbing driving.

In the U.S., a blast of cold air across southern Texas is set to pass near one of the country’s major oil-producing regions. The front will raise concerns for power-grid operators and natural-gas drillers, though the Railroad Commission of Texas said top producers and pipeline operators don’t anticipate anything other than normal output fluctuations.