Oil headed for its biggest two-day advance since June as concerns over a supply glut eased on hopes that OPEC and its allies will strike a deal to stabilize the market.

Futures in New York rose as much as 1.5 per cent, extending Monday’s 4 per cent gain. An agreement between Saudi Arabian Crown Prince Mohammed bin Salman and Russian President Vladimir Putin over the weekend raised the possibility of an output accord when OPEC and its partners meet in Vienna on Dec. 6. Prices also received a boost after Canada’s Alberta province announced plans to cut production by 325,000 barrels a day.

Crude is rebounding from the worst monthly drop in a decade on growing optimism the world’s top oil exporters will tackle the risk of a glut. Still, Moscow and Riyadh have yet to agree on details, including the size of potential output cuts. A U.S.-China trade truce also sparked bullish sentiment across global markets, pulling the American benchmark out of “ oversold territory” for the first time in almost a month.

“Even if Russia shows a willingness to refrain from ramping up production, that’s a positive sign for Saudi Arabia and the rest of OPEC,” Kim Kwangrae, a commodities analyst at Samsung Futures Inc., said by phone. “Oil’s also getting a boost from the easing trade tensions between America and China, as well as Canada’s output cuts which will lift Western Canadian Select’s discount to the U.S. marker.” 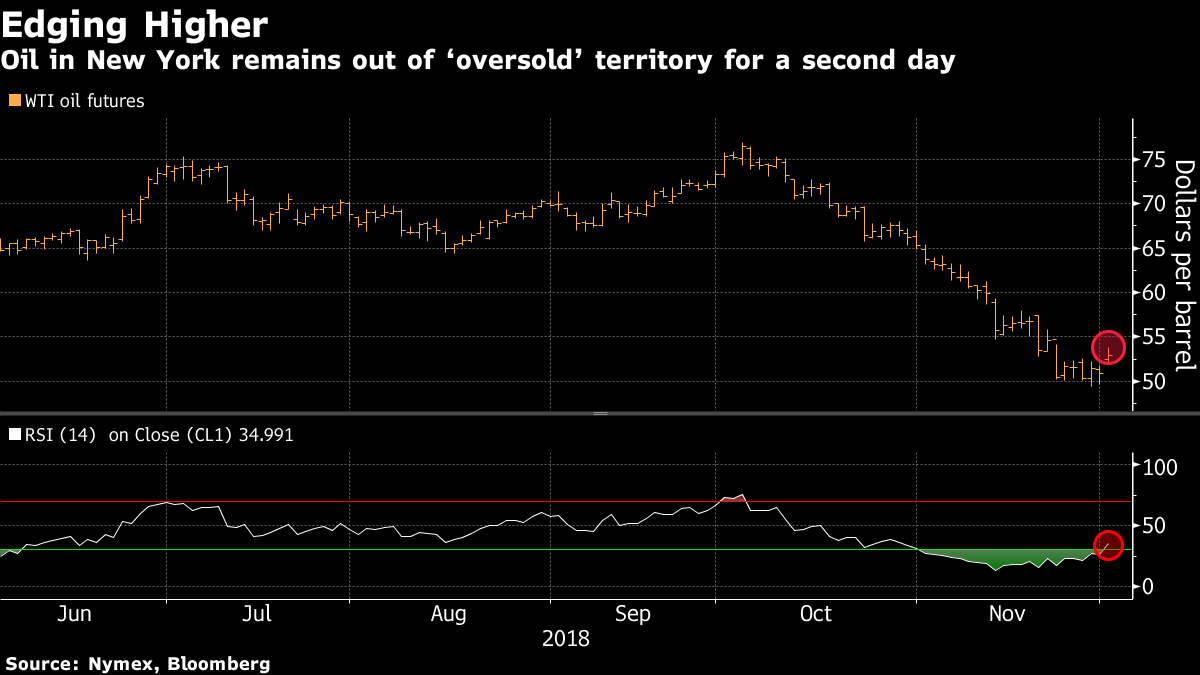 Brent for February settlement gained 68 cents to US$62.37 a barrel, after closing at US$61.69 on London’s ICE Futures Europe exchange on Monday. Technical indicators are showing a bearish cloud is still hanging over prices, with the 50-day moving average having fallen below the 200-day average, arriving at what’s known as the death cross. The global benchmark crude was at an US$8.62 premium to WTI for the same month.

While the Joint Technical Committee, which met on Monday, is said to have made no recommendations for the Vienna meeting on supplies, another OPEC advisory body said last week a production cut of 1.3 million barrels a day is needed to balance the market in 2019. On Sunday, group President and the United Arab Emirates Energy Minister Suhail Al Mazrouei said he was optimistic the Organization of Petroleum Exporting Countries and its allies will reach an accord.

Alberta’s plan to mandate OPEC-style output curbs further eased fears of a glut. The unprecedented step to ease a crisis in the Canadian energy industry will reduce production of raw crude and bitumen by 8.7 per cent starting in January until the levels of excess oil in storage are drawn down. The cut would then drop to 95,000 barrels a day until the end of next year at the latest.

Western Canadian Select’s discount to U.S. benchmark WTI narrowed US$6 to US$23 a barrel on Monday, data compiled by Bloomberg show. The discount sank to as much as US$19.75 a barrel earlier in the day, the tightest since July. On an outright basis, prices were up more than $8 a barrel.

Other oil-market news: American crude inventories probably fell 2.25 million barrels last week, according to a Bloomberg survey before government data Wednesday. Iran warned that oil prices will slump to $40 a barrel unless OPEC and its allies cut output significantly, an official from the Persian Gulf state said. A few hours after Qatar shocked the oil world on Monday by announcing plans to quit the OPEC cartel after 57 years, a leading member of the country’s ruling family used Twitter to blast the producer group.