Oil’s rally fizzled following a report that OPEC members are exploring the idea of exempting Russia from its oil-production deal, which could open the door for other producers to pump more oil.

West Texas Intermediate futures in New York shed nearly all of its gains to settle under US$115 after earlier rising almost US$5. Exempting Russia from oil-production targets could potentially pave the way for Saudi Arabia, the UAE and other producers in the cartel to pump more crude, the Wall Street Journal reported.

Earlier, prices rallied within a hair of US$120, the highest since early March, as the latest round of EU sanctions would forbid buying oil from Russia delivered by sea but includes a temporary exemption for pipelines. The package, designed to punish Moscow for the invasion of Ukraine, also proposes a ban on insurance related to shipping oil to third countries. Oil still posted its longest run of monthly gains in more than a decade. 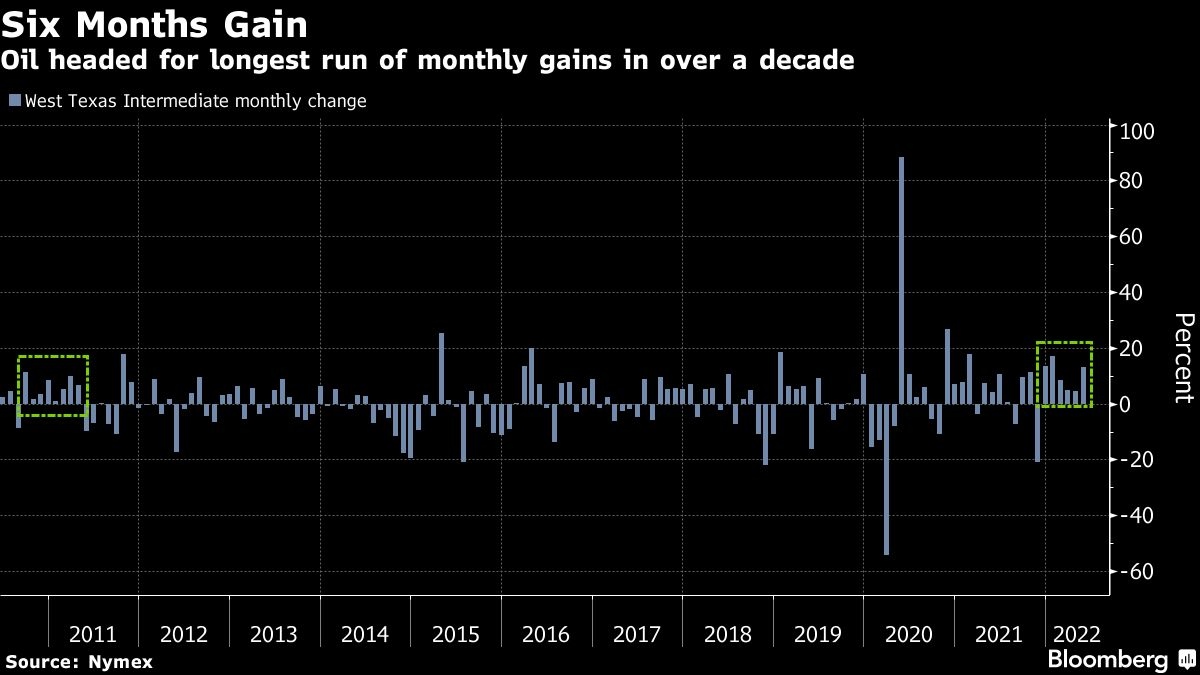 Crude has soared this year as the conflict in Europe tightened global supplies at a time of rising demand, depleting stockpiles and boosting product prices to all-time highs. Oil prices have also been lifted as drivers kick off the nation’s busy summer driving season just as authorities in China loosen anti-virus curbs that had hurt energy consumption.

The EU’s ban gives an exemption for Hungary, which would continue to receive Russian pipeline oil. The move follows bans by the US and UK on Russian exports, although buyers in Asia -- particularly China and India -- have stepped in to take more of the shunned cargoes.

“What has been announced is what we have known for a while – most EU countries are planning to continue to wean themselves from a diet on Russian crude,” said Ed Morse, Citigroup global head of commodity research. “Much of that is already been displaced and bought at around a 30 per cent discount to Brent crude.”

In China, there are further signs of lockdowns easing, stoking mobility. Shanghai will let people in areas deemed low risk for COVID-19 leave housing compounds, as the key hub moves to dismantle the last remaining curbs that confined most of its 25 million residents to their homes for two months.

The oil market is steeply backwardated, a bullish pattern marked by near-term prices trading at a substantial premium to longer-dated ones. A widely watched metric, the December-December differential, was wider than US$14 a barrel.