Oil slumped the most in a month as a rising dollar pushed financial investors, who had piled into commodities to guard against inflation, toward the exits for other sectors.

Futures in New York fell 1.5 per cent on Thursday. A strengthening U.S. dollar reduced the appeal of commodities priced in the currency a day after the Federal Reserve signaled its ultra-easy monetary policy will soon come to an end. The Bloomberg Dollar Spot Index climbed for a fifth straight session, the longest streak of gains since March 2020.

“Everything commodity-related is down big,” said John Kilduff, a partner at Again Capital LLC. “This is a liquidation that had been building up for weeks.” 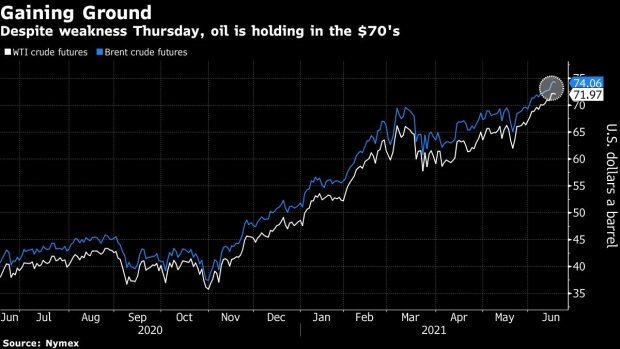 Despite the weakness in headline crude prices on Thursday, the oil market continues to display signs of strength as the pandemic ebbs. Citigroup Inc. said the international benchmark Brent could soon top US$80 a barrel and pent-up leisure demand, enabled by vaccine roll-outs, will underpin global consumption. Exports of U.S. crude and fuels soared last week, according to a U.S. government report on Wednesday.

Yet, oil as a hedge against inflation has lost its shine after the Fed announcement, prompting some investors to rotate into growth-oriented stocks. There were other signs that oil was due for a pause: technical indicators earlier this week suggested crude had become overbought and Brent prices struggled to make headway near the key, psychological US$75-a-barrel level.

Many momentum traders have been long on oil since the day after the approval of the first vaccine against COVID-19, according to Bob Yawger, head of the futures division at Mizuho Securities. “Those guys are just pulling the plug.”

The Bloomberg Commodity Spot Index, which tracks prices for 23 raw materials, fell for a sixth session.

Meanwhile, Iranian remarks suggesting a nuclear deal is close to being revived sparked concerns about a potential flood of crude exports from the Islamic Republic. Iranian Deputy Foreign Minister Abbas Araghchi said fundamental issues still remain to be negotiated and negotiators will continue talks regardless of the country’s June 18 election.

The prospect of more Iranian crude in the oil market will weigh on investors in the short term along with the rising dollar, according to Ed Moya, senior market analyst at Oanda Corp. “You have two big events that are likely big headwinds on oil.”