Oil Plunges: How Much Lower Can Prices Go?

Oil crashed the most in 29 years as Saudi Arabia and Russia vowed to pump more in a battle for market share just as the coronavirus spurs the first decline in demand since 2009.

Futures slumped by about 25 per cent in New York and London Monday as Moscow and Riyadh began an all-out price war after the collapse of talks between members of the OPEC+ alliance last week.

Saudi Arabia slashed its official crude pricing and is threatening record output. Russia’s largest producer, meanwhile, said it will ramp up production next month. What’s more, all of the annual growth the International Energy Agency had anticipated last month has been erased, and oil demand is now expected to contract by 90,000 barrels a day this year.

The oil crash sent shock-waves across markets, with U.S. stocks going through one of the biggest sell-offs since the financial crisis, Treasury yields plummeting, and credit markets buckling. Stocks of energy producers were dragged down, and explorers including Occidental Petroleum Corp. and Parsley Energy Inc. planning drilling cuts.

“We’ve never experienced anything like this before,” says David Tawil, president of Maglan Capital in New York. “There was demand weakness before and this clash of the titans between Russia and Saudi is the ultimate shock. In the near term, markets are going to be absolutely chaotic and it’s going to be an overwhelming time for the entire industry.”

The Saudi-Russia price war could wipe out the results of three years of OPEC+ production cuts in a single month. 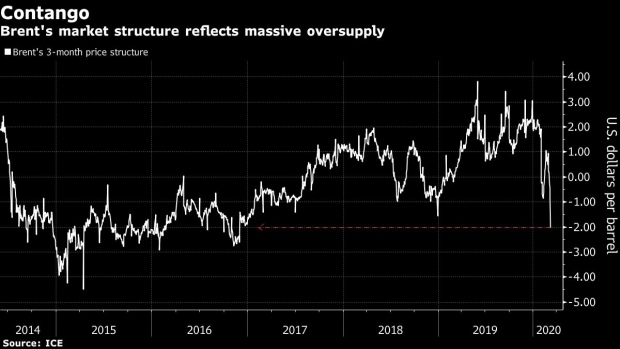 “There will be almost no place to hide,” Stewart Glickman, energy analyst at CFRA Research said in a note. “Exploration and production, of course, will be worst off since their fortunes wax and wane with crude oil prices.”

Brent for May settlement fell 24 per cent to settle at US$34.36 on the London-based ICE Futures Europe Exchange after tumbling to US$31.02 earlier in the session.

West Texas Intermediate crude for April slumped as much as 34 per cent to US$27.34 a barrel on the New York Mercantile Exchange. The U.S. benchmark settled at US$31.13.

The shocks in supply and demand have also reverberated across time-spreads, options and volatility. Brent’s three-month price structure widened sharply as oil for prompt delivery collapsed against later shipments.

It moved deeper into contango, a sign of bearishness and oversupply, making it profitable for physical traders to buy crude and put it into storage, either in onshore tank farms or at sea on tankers. 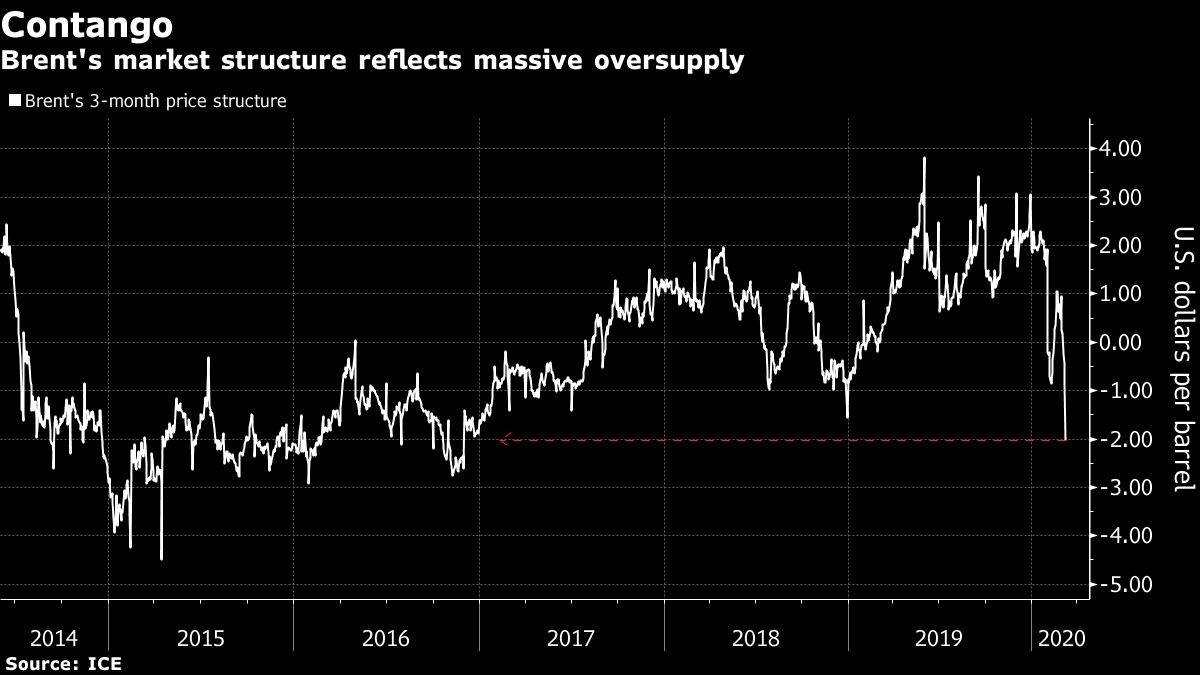 “Markets are bracing for oil prices in the 20s,” said Ellen Wald, president of Transversal Consulting and a nonresident fellow at the Atlantic Council’s Global Energy Center. “I don’t think production can win this war. There’s not enough demand for it. That’s the difference between 2014 and today.”

Saudi Arabia slashed its official prices by the most in at least 20 years over the weekend and privately told some market participants it could raise output by a record 12 million barrels a day. Russia’s state oil company Rosneft PJSC is planning to lift oil production and could start ramping up output on April 1 and add 300,000 barrels a day within weeks of that date.

Energy Minister Alexander Novak said the current state of global oil markets is within Moscow’s forecast range, noting it will make efforts to ensure the nation’s oil sector remains competitive, according to a statement on the government website.

“No one thought this would be a probable outcome,” said Ian Nieboer, managing director at RS Energy Group, now part of Enverus. “There’s an aggressive threat to demand and its amplified by a flood of barrels into markets that don’t need it. It’s hard to imagine where we go from here.”

Amid the collapse in the alliance, Nigeria’s Minister of State for Petroleum said the country would boost oil output and has the capacity to increase output to more than 2 million barrels a day.