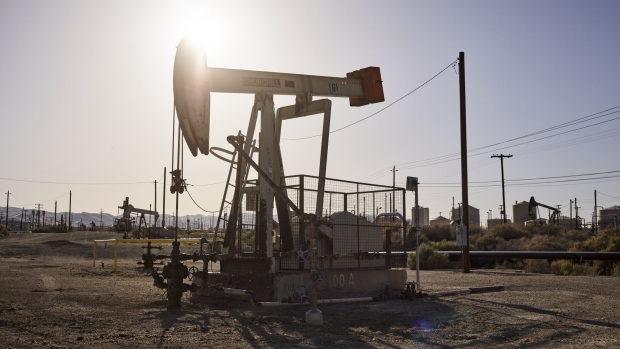 An oil pump jack at the Midway-Sunset Oil Field near Derby Acres, California, U.S., on Friday, April 29, 2022. Oil is poised to eke out a fifth monthly advance after another tumultuous period of trading that saw prices whipsawed by the fallout of Russia's war in Ukraine and the resurgence of Covid-19 in China. Photographer: Ian Tuttle/Bloomberg , Bloomberg

(Bloomberg) -- The US government lowered its annual oil production targets and raised its global demand outlook, adding to supply risks as OPEC and its allies plan output cuts to defend crude prices.

The Energy Information Administration cut its forecast for domestic oil production next year to 12.63 million barrels a day, versus an earlier estimate of 12.7 million, it said in a monthly report. The agency meanwhile expects annual petroleum usage globally to rise roughly 2 million barrels a day through next year.

The slimmer forecast adds a another layer of worry to a market dealing with unprecedented volatility since the war in Ukraine unleashed widespread bans on Russian oil. America has become a key supplier of replacement barrels particularly for Europe, the hardest hit by the boycott of Russian barrels. Meanwhile, OPEC+ announced this week it was walking back a recent production boost.

US shale producers have kept a lid on growth even as oil prices surged this year, prioritizing payouts to shareholders over gushing wells, a practice Barclays analysts believe will continue into next year.

Despite cutting its view for 2023 to the lowest forecast since February, it is still a record and surpasses a previous one set in 2019. The EIA also lowered for a third month its output forecast for 2022 to 11.79 million barrels a day, compared with a prior estimate of 11.86 million.