OPEC+ is responding to the oil market’s collapse with an urgency never seen before.

The alliance’s program of production cutbacks this month is well on the way to trimming 9.7 million barrels of daily crude output — roughly 10 per cent of global supplies, according to tanker-tracking data, interviews with physical crude traders and refiners, and assessments by consultants. And that’s just in the first two weeks of the agreement.

“The actual production cuts are deeper and more spectacular than any reasonable person would have thought a week ago,” said Ed Morse, head of commodities research at Citigroup Inc.

Despite skepticism over the efficacy of the measures unveiled in mid-April by Saudi Arabia, Russia and their partners, compared to the immense hit to demand, the impact has been substantial. Oil prices have recovered by 60 per cent in the past three weeks, as a pick-up in fuel use is complemented by the supply cuts. 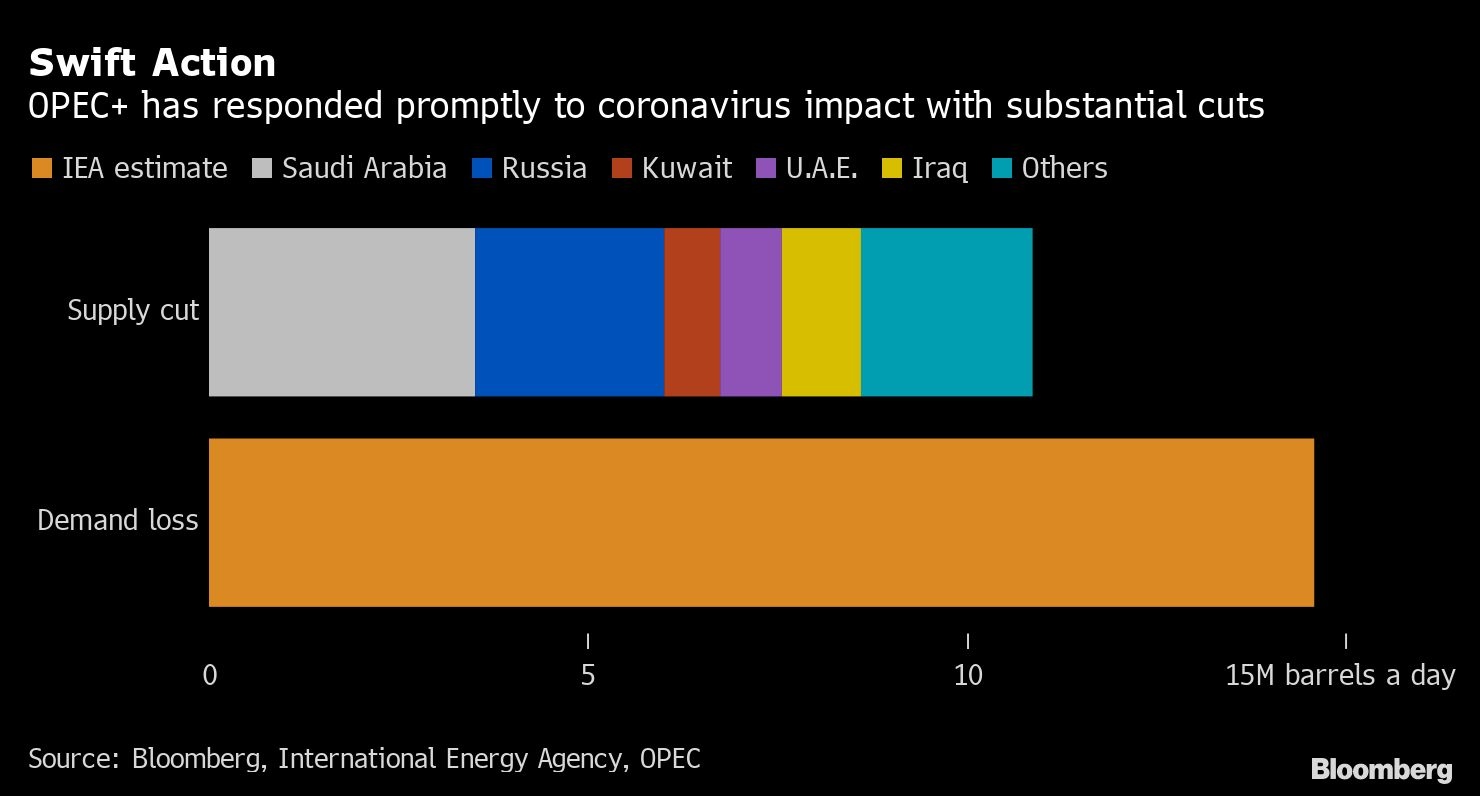 Much of the prodigious effort undertaken by the Organization of Petroleum Exporting Countries and its allies has been unavoidable.

With a dearth of buyers and storage, they’ve had little choice but to slash production. Saudi Arabia has been forced to reverse the massive output increases made in April, when Riyadh was waging a vicious battle for market share with fellow OPEC members. And the kingdom has come under immense political pressure from allies in Washington to shield the U.S. oil industry.

Yet at the heart of the swift response is a recognition of the scale of the oversupply, and the threat posed to economies dependent on crumbling oil revenues.

“Partly it’s because they couldn’t sell the oil anyway,” said Morse. “But this is a moment when they really do recognize their mutual interdependence and commonly-shared vulnerability.”

For Saudi Arabia’s sovereign wealth fund, which is central to the kingdom’s economic overhaul, the crisis has even spurred it to find new ways to unlock liquidity. It’s planning to borrow about $10 billion by pledging stakes in SoftBank Group Corp.’s technology investment vehicle as collateral, according to people familiar with the matter.

Petro-Logistics SA, which has observed OPEC’s movements for four decades, says exports from the 23 nations are down 15 per cent so far this month. Kpler SAS and Vortexa Ltd., analytics firms that also monitor flows, have also detected a sharp pullback.

“All participating countries are rapidly ramping up their level of compliance,” OPEC Secretary-General Mohammad Barkindo said in a Bloomberg television interview Friday. “So far, so good.”

Saudi Arabia, having made preparatory curbs before the deal took effect, slashed exports by 2.6 million barrels a day — or about 28 per cent — to 6.7 million a day during the first two weeks of May, tanker tracking shows.

State-producer Saudi Aramco will cut June exports to at least a dozen Asian customers, according to traders notified by the company. Shipments to the U.S. and Europe will be pared even more sharply. Gulf allies Kuwait, the United Arab Emirates and Oman have taken similar steps.

While it’s typical for the Gulf bloc to be fully compliant, they’ve surpassed those standards this time by volunteering to make even deeper cuts before the first month of the latest agreement has elapsed. An additional Saudi reduction of 1 million barrels a day in June will bring its output to the lowest since 2002.

What’s surprised physical crude traders even more is the commitment shown by Russia.

In previous agreements, Moscow has secured the right to incrementally phase in its allocated cutbacks, arguing that its more challenging geological conditions require a gradual approach. The result being it rarely met its compliance target.

This time round, data from the Energy Ministry’s CDU-TEK unit shows crude output may already be down to 8.75 million barrels a day -- within striking distance of their 8.5 million-barrel target.

“We’re starting to see some discipline come into the producing countries’ programs,” Clay Seigle, managing director at Vortexa, said in an interview from Houston. “The headline figures from the first 10 days of the month do look like they’re starting to crack down.”

There are exceptions to the general good behavior.

Iraq, which regularly flouts its pledges to OPEC+, has trimmed exports only marginally, tanker-tracking data shows. Shipments are down only 190,000 barrels a day this month, while the accord calls for the country to cut production by just over one million a day.

Although Baghdad has decided how to allocate the million-barrel reduction with international oil companies like BP Plc and Exxon Mobil Corp., operators are still awaiting a letter detailing their share of the burden, according to people familiar with the matter.

Yet even OPEC’s most recalcitrant member is showing signs it may reform. Both Saudi Energy Minister Abdulaziz bin Salman and OPEC Secretary-General Mohammad Iraq have recently conferred with Baghdad about compliance, which Baghdad has promised to improve, Barkindo said on Friday.

Iraq’s state oil-marketing department has reduced contractual supplies of Basrah crude due to be shipped to at least three customers in June, according to traders who received the notification.

Kazakhstan, which like Iraq has disregarded limits agreed with OPEC+ in the past, is also dragging its feet. Tengizchevroil, the venture led by Chevron Corp. that pumps a third of the nation’s oil, was still reviewing the government’s instruction to cut back as of May 11.

Despite the laggards, the visible drop in exports and public assurances of adherence have convinced traders that OPEC+ is more serious than ever. Discussion in the market has flipped from whether the supply cuts are enough, to how long they can be maintained.

“It’s more than enough to balance the market,” said Morse. But “as prices rebound and they see inventories are drawing, they’ll be tempted to bring production all the way back.”