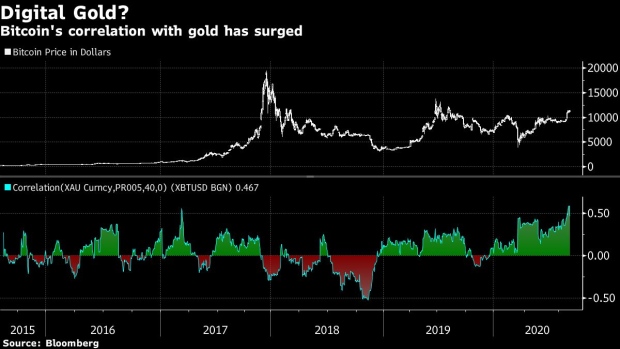 (Bloomberg) -- The behavior of retail investors during the pandemic varies significantly across age groups, according to JPMorgan Chase & Co.

Investors generally are interested in alternative assets but older ones are buying gold while younger ones like Bitcoin, strategists led by Nikolaos Panigirtzoglou said. Millennials are embracing stocks, particularly technology shares, whereas older individuals are selling equities, they said.

“The older cohorts continued to deploy their excess liquidity into bond funds, the buying of which remained strong during both June and July,” the strategists wrote in an Aug. 4 note that analyzes investment flows.

Retail investor demand this year is evident in the 46% jump in stocks globally from March’s lows, the surge in worldwide holdings of gold-backed exchange-traded funds and recent rallies in cryptocurrencies. The presence of amateur traders is also being seen in everything from exuberant options to smoothed trading action, while their stock picks and market timing appeared to fare pretty well compared with institutions.

Gold and Bitcoin ETFs have been experiencing strong inflows over the past five months, as both old and young see the case for an “alternative” currency, the strategists wrote. The Bloomberg Dollar Spot Index has declined about 1.7% over the same period, fueling a debate about whether a prolonged period of dollar weakness is at hand.