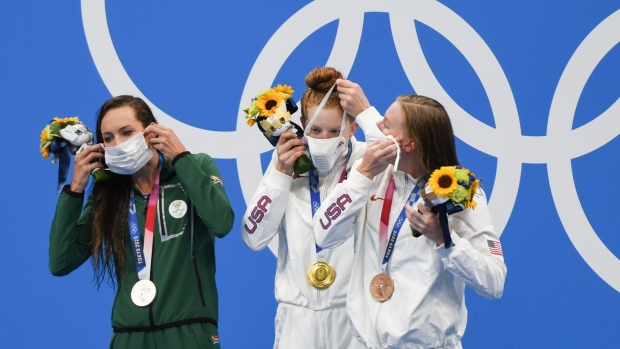 Members of the media prepare to take a PCR test at the main press center of the Tokyo Olympic Games. , Getty Images

(Bloomberg) -- The Tokyo summer Olympic Games have reported over 200 cases among athletes and related personnel, but experts say the bubble system created to separate the sporting event from the Japanese capital appears to be working -- so far.

Outside the Olympic venues, the city of Tokyo is seeing a surge in Covid-19 infections and reported a record 3,865 new cases on Thursday. Yet, among athletes and stakeholders of the Olympics, the positivity rate has been only 0.02% with over 300,000 tests conducted so far, organizers said on Friday. Of the nearly 40,000 tests performed at the airport for games participants, only 32 have been positive.

Before the games kicked off, many scientists had warned that the Olympics could cause major clusters that could spread into the general population, a risk of holding a major international event during a global pandemic. For now, the risk of cross-contamination seems contained, public health experts say, while warning that the situation could change suddenly given the threat from the highly infectious delta variant that’s spreading in Tokyo and around the world.

“The testing and bubble protocol appears to be functioning well,” said Amesh Adalja, a senior scholar at the Johns Hopkins Center for Health Security and an infectious disease physician. “Since the organizers bafflingly did not mandate vaccination as a condition of participation and the unvaccinated were welcomed, these numbers seem within expectations,” he said of the positive cases reported so far at the games.

In the so-called Olympics bubble, a string of measures separate participants from the general public. Athletes cannot travel outside of their place of stay and competition venues. They can only use transportation dedicated for the Olympics, and can only spend time with people on a pre-submitted list of contacts. They are also separated from the media by a distance of at least two meters at all times.

Athletes and officials coming into Japan from overseas this month were also required to take two Covid tests within 96 hours of their flight’s departure, take another test on arrival, and quarantine for the first three days. Athletes must also take daily tests during their time in the country, and leave within 48 hours of the end of their competition.

While it would have been reasonable to expect lower case numbers given the testing requirements, the Covid prevention measures for the Olympics broadly appear to be functioning so far, Toshio Takatorige, a public health professor at Kansai University in Osaka, said this week.

“Rather than see the numbers as too high or too low, for now my view is that the system in place to control the virus is working,” he said.

Of the 220 cases linked to the games, 23 were athletes, 65 were games-related personnel, and 110 Tokyo 2020 contractors. Around half were residents of Japan.

“Considering the circumstances I think we’ve been pretty successful, very successful for the mid-point,” Mark Adams, spokesperson of the International Olympic Committee told reporters Friday. “Of course, it’s not over until it’s over.”

Meanwhile, the surge of cases in Tokyo have prompted Japan to expand a state of emergency to areas surrounding the city and extend it to the end of August. Only around a quarter of Japan’s population has been fully vaccinated so far, and the percentage of cases caused by the delta variant is also increasing.

The latest seven-day average of positive results on tests conducted in the capital was 18%. Even as this year’s games will take place largely without spectators in attendance, scientists warn of the risks that remain.

While the decision to ban spectators was the right one, the presence of the delta variant could still threaten the games, according to Spencer Fox, an associate director at the University of Texas at Austin who specializes in infectious disease modeling.

“Tokyo appears to be having a pandemic surge consistent with other countries facing the delta variant,” he said. “The presence of the delta variant dramatically increases the risk for the Games to become a superspreading event.”

The bubble system also has its limitations. For instance, most volunteers don’t live within the Olympics village, as is the case with various contractors, including cleaners and food providers.

“In science you can never say there’s any guarantee,” said Tara Kirk Sell, a former Olympian and professor at Johns Hopkins Bloomberg School of Public Health.

For more, read: How the Tokyo Olympics Risks Turning Into a Superspreader Event

A University of Newcastle paper published last week in the Medical Journal of Australia pointed out that while the various Covid-prevention measures taken will provide protection, they are likely to be inadequate.

“We cannot expect a country with thousands of cases per day to deliver a COVID‐19‐safe Olympics in mid‐July,” the authors wrote. They noted that Japan is likely underestimating its Covid-19 cases for the general populace, and risks remain of possible lapses in the bubble system and the further spread of more infectious variants.

Still, given the need for overseas participants to enter Japan a little while before their competition, it’s looking increasingly like the containment measures may hold until the end of the games, said Kansai University’s Takatorige.

“The greatest amount of concern was around the time the Olympics started,” said Takatorige. “If the event manages to get through things relatively safely by the end of July, they’ve gotten through the worst of it.”