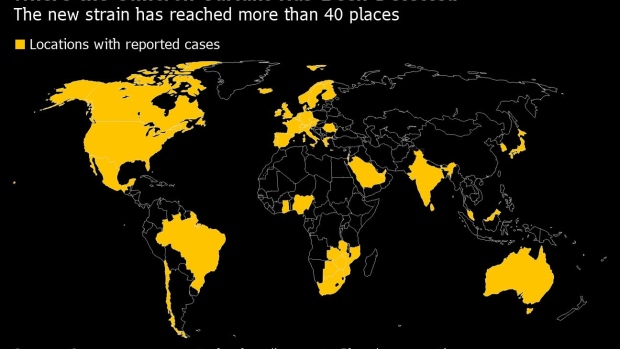 Initial data from South Africa, the epicenter of the outbreak of the omicron variant, don’t show a resulting surge of hospitalizations. “Thus far, it doesn’t look like there’s a great degree of severity to it,” Anthony Fauci, U.S. President Joe Biden’s chief medical adviser, said on Sunday, while cautioning it’s too early to be certain.

Even as omicron has spread to at least 17 U.S. states, Fauci said the Biden administration is reevaluating the travel ban on southern African countries as more information becomes available. Moderna Inc. President Stephen Hoge said there’s a “real risk” that existing vaccines will be less effective against omicron.

Georgia reported its first in-state infection caused by the omicron variant, of a person who recently traveled to South Africa. The person is isolating at home, the Department of Public Health said on Sunday.

Another Georgia resident returned home for two days after a trip to South Africa, then traveled to New Jersey, where she was diagnosed with the new variant, the two states reported on Friday.

A Norwegian Cruise Line ship with at least 10 passengers who tested positive for Covid-19 docked Sunday in New Orleans, the Associated Press reported.

The Norwegian Breakaway had departed from New Orleans on Nov. 28 and stopped in Belize, Honduras and Mexico. It has more than 3,200 people on board.

Louisiana has confirmed an omicron case announced as “probable” two days ago, the state’s Department of Health announced on Twitter. The case involved a person in the greater New Orleans area who had traveled recently in the U.S.

Tunisia announced its first infection from the omicron variant, in a traveler from the Democratic Republic of Congo who arrived on a flight from Turkey on Friday, the Associated Press reported. Several fellow travelers who tested negative for Covid-19 on arrival are in quarantine.

The gathering turned violent when a few dozen rioters hurdled firecrackers and flares toward the police barricade that kept the protesters from occupying the Schuman roundabout in the capital’s European Quarter.

The protest was aimed at mandatory vaccination among health-care workers and the obligation to wear masks from the age of six.

Romania introduced new travel safety restrictions after it reported its first two infections caused by the omicron variant. The country will require mandatory PCR tests for all people who enter the country from outside of the EU. Those not vaccinated must quarantine for 10 days.

Initial data from South Africa, the epicenter of the outbreak of the omicron variant, are “a bit encouraging regarding the severity,” Anthony Fauci said on Sunday.

“Thus far, it does not look like there’s a great degree of severity to it,” Fauci, U.S. President Joe Biden’s chief medical adviser, said on CNN’s “State of the Union.” “But we’ve really got to be careful before we make any determinations.” He added that existing vaccines may provide “a considerable degree” of protection against the variant.

Fauci said the administration is reevaluating the travel ban on eight southern African countries as more information about omicron variant and its spread becomes available.

“That ban was done at a time when we were really in the dark -- we had no idea what was going on,” he said.

Moderna Inc. President Stephen Hoge said there’s a clear risk that existing Covid-19 vaccines will be less effective against the omicron variant, though it’s too early to say by how much.

An updated formulation would be probably be needed if effectiveness is shown to drop by something like half, Hoge said on ABC’s “This Week” on Sunday.

“I think that there’s a real risk that we’re going to see a decrease in the effectiveness of the vaccines,” Hoge said. “What I don’t know is how substantial that is.”

Slovakia, which is currently enduring one of the world’s fastest rise in infections on per capita basis, is considering prolonging its tight lockdown by a week to Dec. 16. The first 10 days of restrictions failed to stem the pandemic surge.

A panel of government experts also proposed on Sunday stricter enforcement of the current rules, which shut down most shops and services and effectively ordered remote work, the daily Sme reported.

Denmark had as of Sunday registered 183 cases of the omicron variant, up from 135 a day earlier, SSI, the country’s institute for infectious diseases, said in a statement. The number of infections is rising at a “worrying” pace, Henrik Ullum, the head of SSI, said in the statement. “We now see infection chains among people who haven’t been traveling or have had connections with travelers,” he said.

The Steve Biko and Tshwane District Hospital Complex in Pretoria had 166 new admissions between Nov. 14 and Nov. 29, with 42 patients currently in the Covid wards, according to a report showing the early experience of patients at the hospital group. Most originally sought treatment for ailments unrelated to the coronavirus and were discovered to have it in testing required for admission.

The omicron variant “is more transmissible, it seems, than others,” President Cyril Ramaphosa said on Saturday, according to the Sunday Times. “Our hospital admissions are not increasing at an alarming rate, meaning that whilst people may be testing positive, they are not in large numbers being admitted into hospitals.”

Senegal found a first case of the omicron variant in a visitor who was leaving the country, the Institut de Recherche en Santé said on Saturday.

The 58-year-old patient arrived in Senegal by air from another West African country on Nov. 22, it said, adding that he has since been placed in quarantine and is not showing any symptoms.

Italy is cracking down on the small minority that has so far refused the shot. As of Monday, a “green pass” -- proof of vaccination, recovery or a recent negative test -- will be required for buses, metro, local trains and hotels. It’s already compulsory for working, long-distance travel and most indoor venues. The new “reinforced” green pass will also be needed for many leisure activities, including eating inside restaurants, going to theaters, cinemas, sporting and other public events.

A separate poll by INSA for Bild am Sonntag showed 63% of unvaccinated don’t intend to get a jab, while 20% plan to do so.

Germany’s parliament is set to vote on mandatory vaccinations in the coming weeks with both outgoing Chancellor Angela Merkel and her successor Olaf Scholz backing such a measure.

France will try to avoid any new health rules including a lockdown in the face of rising coronavirus cases and the spread of the omicron variant, according to Finance Minister Bruno Le Maire. “We should do the maximum to avoid any new health restrictions,” he said Sunday in an interview with Europe 1, Les Echos and CNews. Unlike some European countries, the government isn’t in favor of making vaccines mandatory, he said.

Deputy Prime Minister Dominic Raab, on Sky News, pushes back against mandatory vaccines but calls those who don’t get jabbed “irresponsible.”