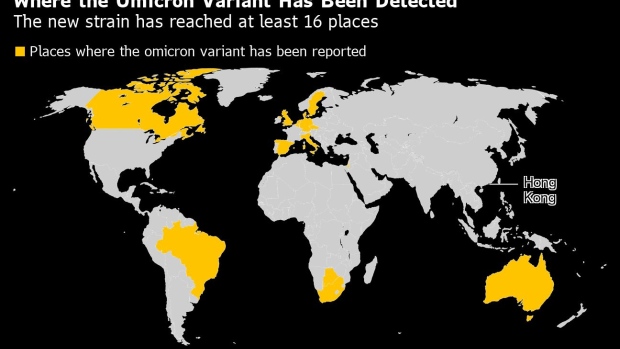 Canada and Hong Kong were among countries that tightened travel restrictions. The U.S. is also considering similar curbs.

Divisions arose among vaccine makers over how well the inoculations will work against omicron. Meanwhile, Germany took a step closer toward making vaccinations compulsory.

Canada tightened travel restrictions meant to contain the spread of the omicron variant of Covid-19 as it identifies more suspected cases already in the country.

The government will now require all air travelers into Canada -- from countries other than the U.S. -- to test at the airport, whether they are vaccinated or not, Health Minister Jean-Yves Duclos said Tuesday at a press conference. Canada is also considering new testing rules for travelers from the U.S. by both land and air if needed.

Merck & Co.’s  Covid-19 pill gained a key recommendation from advisers to U.S. regulators, increasing the likelihood that the treatment for high-risk patients will be cleared for use in the U.S.

The Food and Drug Administration’s advisory committee voted 13-10 to back Merck’s anti-viral drug molnupiravir, saying the benefits outweigh the risks.

The pill is intended to treat mild-to-moderate Covid-19 in adults at risk of developing severe illness. Merck developed the treatment with partner Ridgeback Biotherapeutics LP.

Brazil detected two cases of the omicron variant in preliminary testing, the first cases of the new strain confirmed in Latin America.

The variant was spotted in samples from a traveler who had recently arrived from South Africa and his wife, health watchdog Anvisa said in a note on Tuesday. The tests will be repeated for further confirmation, it said, giving no further information about the patients. Brazil was among nations that tightened travel restrictions in response to the emergence of the strain.

“We designed it with the understanding new variants would emerge,” Scangos said in an interview. The San Francisco-based company has been testing against new variants as they are discovered and so far has had positive results, he said.

The Texas border town of El Paso is running out of intensive-care unit beds as virus cases surge less than a year after the region became one of the state’s worst hot spots.

Capacity to handle the sickest patients also are being stretched in Amarillo in the Panhandle region of far north Texas. The region that’s home to meatpacking plants that were were ravaged by the virus last year had zero pediatric ICU beds available for an area with a population of more than 400,000. Available adult ICU capacity stood at 14 beds, state figures showed.

Finland is set to mandate social and health-care staff to take vaccinations against the coronavirus and plans to widen the use of Covid passports beyond bars and restaurants, Krista Kiuru, the minister overseeing the pandemic response efforts, told reporters in Helsinki on Tuesday.

The government also told regional authorities to boost test-and-trace efforts and to recommend remote work in areas where the virus is spreading, she said.

Finland has already ordered bars to stop alcohol sales at 5 p.m. starting Nov. 28 unless they require customers to present a Covid passport, and the Helsinki region last week recommended a return to remote work as well as widespread mask use.

The U.S. Centers for Disease Control and Prevention is considering tightened travel recommendations and rules as health officials try to slow the Covid-19 omicron variant’s entry to the U.S.

The agency is looking measures such as narrowing the testing window for travelers into the country and adding quarantine requirements in certain cases, CDC Director Rochelle Walensky said Tuesday on a call with reporters. It’s also expanding surveillance programs at four major airports to test for Covid from specific international arrivals.

Germany took a step closer toward making Covid-19 vaccinations compulsory as the incoming chancellor threw his support behind the move, part of a tougher line by European leaders as the pandemic spirals out of control.

Olaf Scholz called for a parliamentary vote on the step before the end of the year, saying on Tuesday that he would allow lawmakers to make the decision.

Ireland will require all people arriving from abroad to provide a negative Covid-19 test starting Friday, including those arriving from Great Britain, according to a person familiar with the matter.

Travelers arriving into Ireland must provide a negative PCR test taken no more than 72 hours before travel or a negative antigen test taken no more than 48 hours ahead, said the person, who asked not to be named as the information is not yet public. Unvaccinated people must provide a PCR test, they said. A formal announcement may come later today.

Switzerland is considering reintroducing a work-from-home mandate as part of policies to tackle the latest wave of the coronavirus.

The government is in talks with regional authorities on a number of options, including forcing the unvaccinated to work from home. Another option is to require workers in indoor settings to wear masks.

Authorities may increase the use of the Covid certificate, which shows if someone has been vaccinated, tested or recovered.

Also up for debate is reducing the number of people allowed at private gatherings without a certificate and cutting the time period under which Covid tests are valid to 24 hours, in the case of rapid antigen tests. Any measure should end on Jan. 24.

The Omicron variant of the coronavirus could lead to more infections among vaccinated people, but they will most likely remain protected from a severe course of illness, Dow Jones reported, based on an interview with the inventor of one of the first Covid-19 vaccines.

While the new variant might evade the antibodies generated in reaction to the vaccine, the virus will likely remain vulnerable to immune cells that destroy it once it enters the body, BioNTech SE co-founder Ugur Sahin said.

Merck & Co. expects its Covid-19 antiviral molnupiravir is likely to be active against the omicron variant based on the treatment’s mechanism of action and currently available genomic information, according to a Tuesday statement from the drugmaker.

However, Merck hasn’t yet done specific research studying the antiviral’s effect against omicron. The company has previously found that the drug works for the gamma, delta and mu variants.

Studies of the antiviral have found that the pill reduced the risk of hospitalization or death for individuals with mild to moderate disease by 30%.

The European Union has recorded at least 44 confirmed cases of the omicron variant in 11 countries, but so far all of those are asymptomatic or people with mild symptoms, according to the European Centre for Disease Prevention and Control.

“So far, no severe cases or deaths have been reported among these cases,” the ECDC said Tuesday in an update on the variant, based on information from public sources.

It added that omicron cases have also been identified in nine additional countries and territories.

Earlier, the European Medicines Agency said it would use expedited procedures to approve new vaccine versions in three to fourth months should the current ones prove insufficient to fight off omicron.

The University of Oxford said it can quickly update its Covid-19 vaccine if necessary. “Despite the appearance of new variants over the past year, vaccines have continued to provide very high levels of protection against severe disease and there is no evidence so far that Omicron is any different,” the university said.

Greek Prime Minister Kyriakos Mitsotakis announced mandatory Covid-19 vaccination for all Greeks above 60 years of age. Those who refuse will have to pay a fine of 100 euros ($114) for each month they don’t get jabbed, starting on Jan. 16.