Somewhere in the world’s busiest port of Shanghai, a container of fertilizer sits among tens of thousands of boxes, waiting for a ride to the U.S. It’s been on the dock for months, trapped by typhoons and COVID outbreaks that have worsened major congestion in the global supply-chain network.

While the fertilizer has been stranded there since May, the port is just one stop on the long journey from central China to the U.S. Midwest. Delays have stretched a delivery that ordinarily would take weeks to more than half a year. And that time frame will keep expanding, as the goods have barely started the roughly 15,000 kilometer (9,300 mile) trek.

This is the tale of one humble shipment and its arduous journey across the world. While some of the barriers keeping it from its final destination may be specific to this particular case, the journey is emblematic of the inertia that has gripped global trade during the pandemic.

From the U.S. to Sudan to China, container boxes have been lying at ports, railyards and in warehouses as the pandemic rages on. In an industry with 25 million containers and some 6,000 ships hauling them, it’s easy to see disruptions as one big headache confined to the shipping world. But each container that’s delayed is economic activity that’s restrained, heaping costs one box at a time on consumers and making it more challenging to put corn on consumers’ tables or deliver presents for the holidays.

It’s also a lesson in the ripple effects across global supply chains, showing the limits of diversification as all networks are still closely connected with China.

“All roads lead back to China, and that has a major effect across the entire supply chain,” said Dawn Tiura, head of U.S.-based Sourcing Industry Group. “Congestion at one port or factory has far-reaching implications for neighboring facilities, which trickles out across the world.” 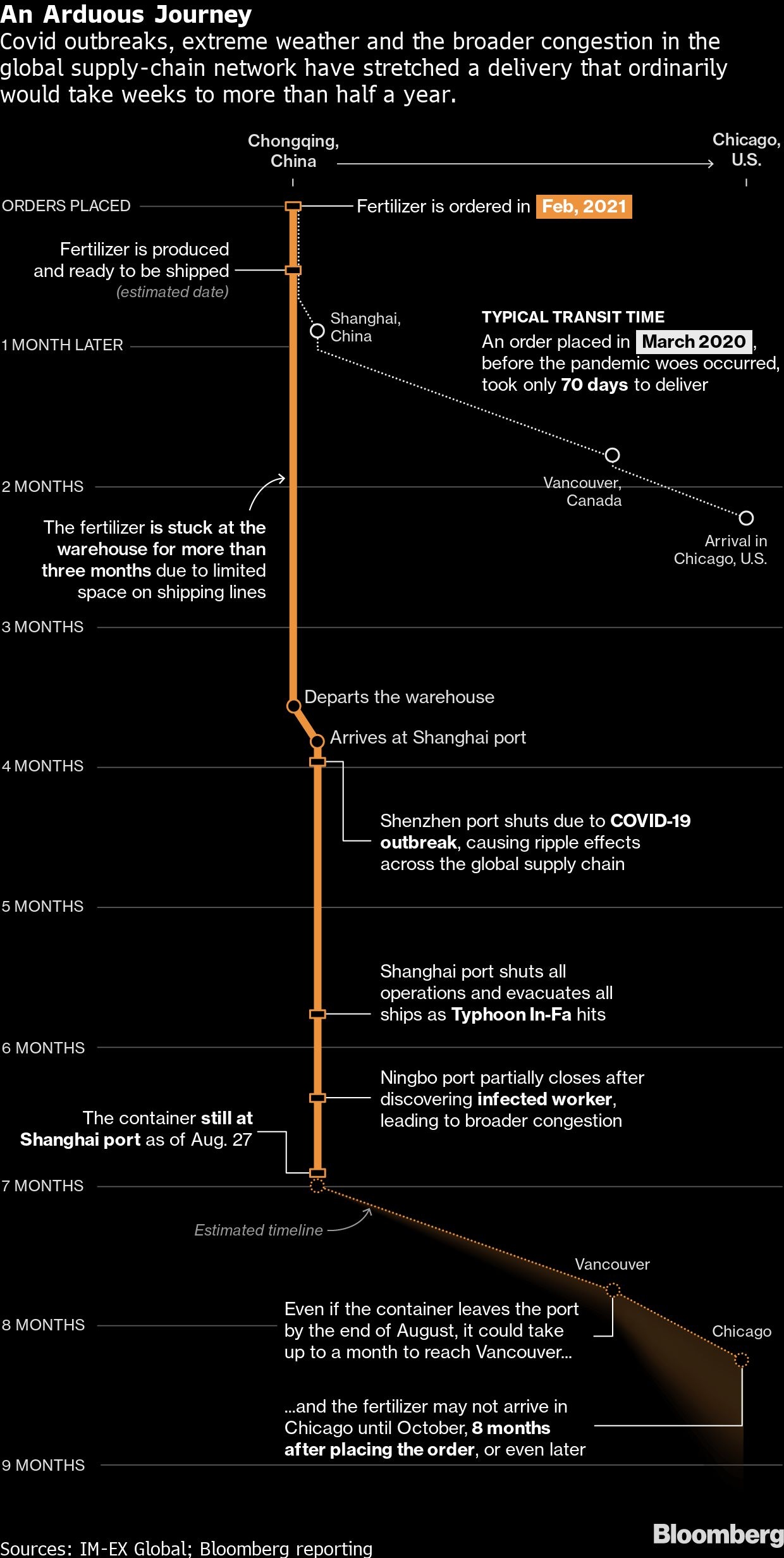 The journey for our particular box of sandy-looking ammonium phosphate began in February. That’s when, deep in the agricultural heartland of the U.S. Midwest, a supplier for farmers in Illinois placed an order for eight container boxes filled with fertilizer from factories in central China.

Before the pandemic, a batch like this would typically arrive in Chicago in April, just in time for growers to use during planting season, said Steve Kranig, director of logistics at IM-EX Global Inc., which is in charge of coordinating transport for the fertilizer cargo.

But by May some of the fertilizer was still sitting in Chongqing, 2,400 kilometers west of Shanghai, where it was manufactured. The culprit: a shortage of empty containers for transport. The crucial return of these steel boxes from trips to the U.S. and Europe has been delayed by everything from understaffing to a lack of trucking equipment to move goods out of ports. The Chinese inland city surrounded by mountains is especially hard to reach by sea, reducing the chances of getting one.

It took Kranig months to secure boxes and spots on several ships that would leave from Shanghai. The fertilizer was loaded into the containers, and they were driven to barge vessels on the Yangtze River.

The trip down China’s busiest inland waterway took eight days. This container was lucky as it was shipped ahead of typhoon season. Others recently haven’t been so fortunate.

Traffic on the Yangtze, which saw a record 2.93 billion tons of cargo pass through in 2019, has been battered as waves of extreme weather swept across China this summer. Authorities have had to close the river during storms, creating severe backlogs at Chinese ports as ships wait days for passage to resume.

While the shipment avoided any flooding disasters, it couldn’t escape high transit costs, as freight rates have skyrocketed on international routes as well as along the Yangtze. In addition to high demand for goods as China’s economy rebounds, the scarcity of vessels is pushing prices higher. Shipping lines are pulling smaller coastal vessels away to use on long-haul routes like the lucrative Trans-Pacific from China to the U.S.

“There is already a limited amount of containers that run the Yangtze River lane, and some companies are paying top dollar to take any available containers so they don’t have to try to move their stuff to Shanghai via non-water routes,” said Kranig.

The container finally arrived in Shanghai on May 27 and a truck delivered it to the world’s busiest port.

Kranig isn’t sure why the container is still stuck in Shanghai while seven other boxes of the shipment found their way to Chicago, but he suspects the chaos that hit Chinese ports is a major factor. The pandemic has thrown shipping into upheaval over the past year and a half, with China becoming a major choke point.

Yantian port in Shenzhen was closed in May because of a COVID outbreak, creating congestion for the entire eastern coast, which in turn caused ripple effects across the global supply chain. Earlier this month, shipping also had to be redirected away from Ningbo, the world’s third-busiest container port, after one employee tested positive for COVID.

Typhoons and extreme weather have made matters worse. In July, the stranded container withstood Typhoon In-Fa, shutting Shanghai and other nearby ports for about four days. 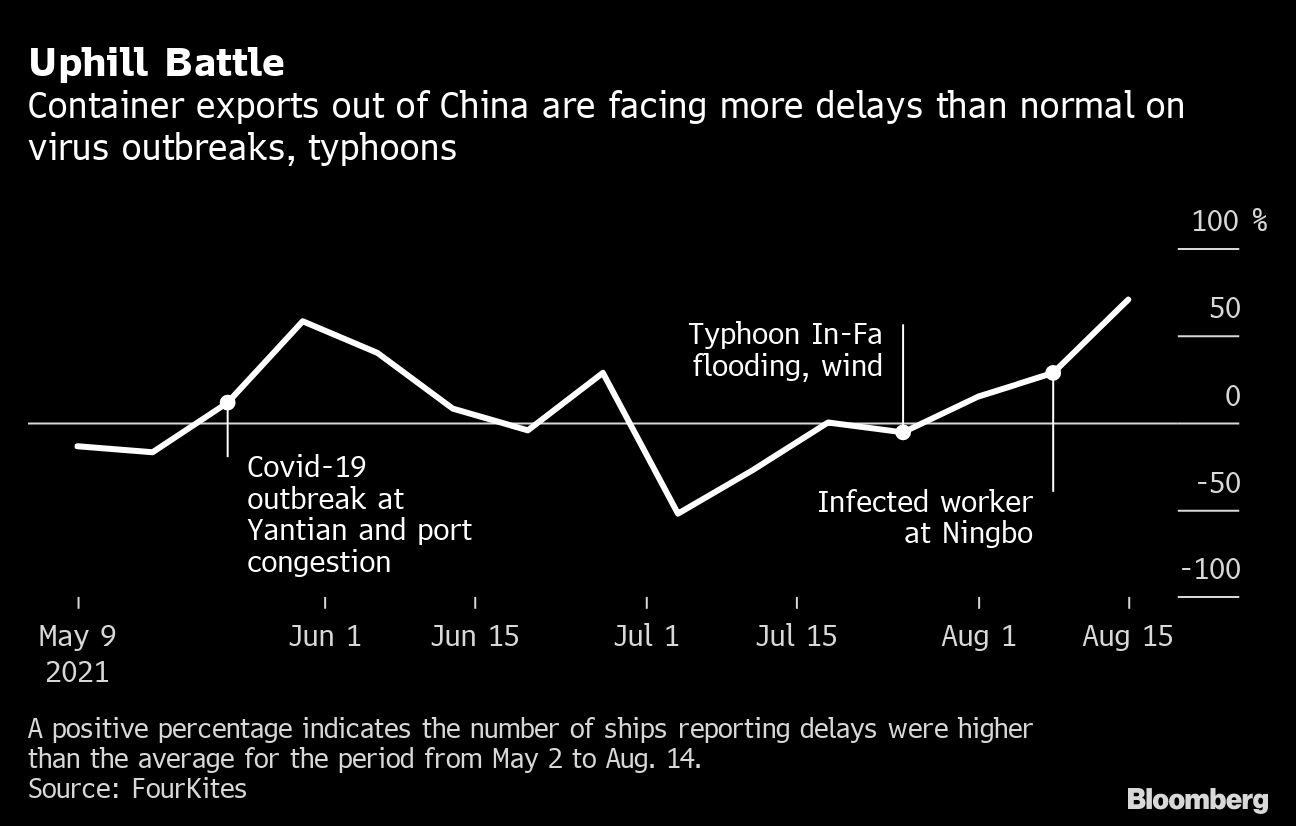 Delays could reach an all-time high in the weeks ahead if the trend persists, said Glenn Koepke, a senior vice president at FourKites Inc., a supply-chain information provider.

For now, the unlucky box of fertilizer remains stranded among the stacks at the port, buried like the crate in the final scene of “Raiders of the Lost Ark.”

THE PACIFIC AND BEYOND

Once the fertilizer finally hitches a ride to the U.S., the risks aren’t over. The Pacific can be a treacherous crossing for ship captains racing to meet deadlines. And when the cargo safely arrives on the North American coast, more headaches await.

The biggest U.S. trade gateway with Asia has been clogged with the most inbound container vessels in more than six months. Earlier this month, 35 ships were anchored awaiting berth space outside the twin ports of Los Angeles and Long Beach, California. Because of the backup, many ships are being diverted to Vancouver.

Next comes the inland journey. It could take another one to three months for the container to get from a West Coast port to Chicago by rail or truck.

The case of the stranded container seems like the worst nightmare for anyone involved in global trade. But Kranig is back for another round of orders -- eight more containers to get from China to the U.S.

The pattern of delays is repeating. Again there were no empty boxes in Chongqing, so Kranig decided to skip the river route -- he loaded the fertilizer in loose, sandy form in open trucks that were driven to a warehouse in Shanghai. The cargo was packed into containers, with some brought to Ningbo this month. Then came news that a part of Ningbo port was shut because of a worker infected with coronavirus.