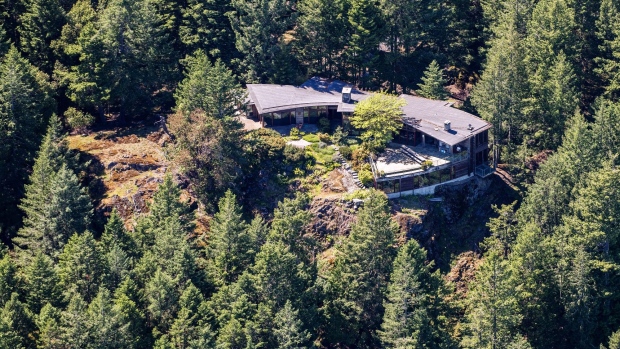 It appeared to be the coup de grace of a Canadian dirty money probe into real estate: a sprawling island manor off the coast of Vancouver that the government said was linked directly to an alleged criminal conspiracy at a state-run Indian bank.

A six-month investigation commissioned by the province of British Columbia had scoured more than a million land titles for signs of illicit funds swirling through Canada’s most expensive housing market. While thousands of properties were flagged as suspect, almost all fell short of clear criminal links.

Save one, according to the probe’s final report. “Most astonishingly,” Attorney General David Eby declared at a press conference when it was presented, “a $3.5 million Gulf Island property acquired with funds allegedly embezzled from a $90 million loan fraud in India.”

It appears the government jumped the gun on that too. There’s little evidence to show the mansion was bought with criminal proceeds - it was purchased by an Indian entrepreneur long before he faced the accusations of fraud.

The tenuous link is the latest misstep by the provincial government after multi-billion dollar laundering estimates it presented that same day failed to hold up to scrutiny. Premier John Horgan is under pressure to deliver answers to a public outraged that the cost of a typical Vancouver home has surpassed a million dollars. He’s blamed the price surge on what he’s called “unchecked“ fraud and launched a formal inquiry into money laundering in a bid to cool the market.

The probe shows that proving ties to criminal activity isn’t so easy. A trail of documents reveals that the property’s been linked since 2005 to a flamboyant Indian-born telecom tycoon, Chinnakannan Sivasankaran, who transferred its ownership while subject to an asset freeze as creditors chased him through courts in the U.K., India and the Seychelles.

Sivasankaran declined to be interviewed for this story or to respond to the B.C. claims the property may have been purchased with embezzled funds. He also declined to answer questions about whether he intended to use the property to settle some of his companies’ debts.

The property in question is glamping for the mega rich -- a timber-and-glass cabin perched in a 26-acre wooded estate with views stretching to Mt. Baker in Washington state. It sits on the southern tip of Salt Spring Island, a halcyon haven of hippies, retirees, and vacation homes often owned by wealthy Americans. Land title records list the owner as Axcel Sunshine Ltd. -- a British Virgin Islands-based shell that Indian investigators say is controlled by Sivasankaran and was used in an alleged fraud at Mumbai-based IDBI Bank Ltd.

According to India’s Central Bureau of Investigation and U.K. court filings, Sivasankaran and his deputies allegedly conspired with former IDBI executives to obtain an $83 million credit facility for Axcel in 2014 in order to pay off loans to other Siva Group companies that had soured -- a practice known as “evergreening” that’s been common among Indian banks holding the world’s worst bad-loan ratio. Within that ignominious group, IDBI has the worst bad-loan ratio.

Of the US$67 million that was actually disbursed to Axcel, the full amount has been accounted for -- it was used to clear the dues of six Siva Group companies, according to the CBI. In other words, that money doesn’t appear to have ended up in Salt Spring, despite the claims by the B.C. government. Sivasankaran had already bought the property long before the alleged mischief at IDBI and when his star was still rising.

Sivasankaran built a fortune starting in the 1980s by anticipating the wants of India’s aspirational consumers: cut-rate personal computers, mobile phones, a Starbucks-copycat named Barista. Siva Group, the sprawling conglomerate he founded, claimed annual revenues of $3 billion at one point. When he purchased the Canadian property through a unit in 2005, the tycoon was on the cusp of clinching a mega deal -- the sale of Indian mobile carrier Aircel Ltd. to one of Malaysia’s richest men for about $1 billion.

As his wealth grew, so did his taste for the finer things in life: gold Rolexes, presidential suites at the Ritz-Carlton, and at least three private planes, according to a 2014 Business Standard profile. The Salt Spring estate is decidedly modest compared to his other real estate sprees like the “Hammer Time” mansion in California -- a 40,000-square-foot enormity with gold-plated gates and a 17-car garage that he bought from M.C. Hammer when the rapper could no longer afford to keep it.

“A first-class flight is still public transport,” Sivasankaran told Singapore’s The New Paper in 2008 after paying $1 million for a year’s membership in an elite club to supplement his transport, with four jets and two yachts as “back up.”

If the 62-year-old mogul had intended to hide some of his vast wealth, he would’ve found few places as welcoming as Canada. The country has long accepted cash of unknown origin from around the world with few questions asked and guarded the anonymity of owners as tightly as any tax haven, while lending transactions a veneer of respectability -- a process quaintly referred to in international law enforcement circles as “snow washing.”

Sivasankaran -- better known as Siva -- didn’t take full advantage of Canada’s veil of secrecy. He used an eponymous Bermuda-registered shell Siva Ltd. to buy the property for C$3.6 million in 2005, according to B.C. property records. His name and signature appear in land title documents nearly a decade later when the residence was transferred to Axcel.

Sivasankaran has proved slippery in the past: Bahraini telecom operator Batelco spent years chasing him through courts in the U.K., India and the Seychelles -- where at some point he’d become a citizen -- to pay a claim related to a failed joint venture.

A London court placed a worldwide freezing order on Sivasankaran and Siva Ltd.’s assets in July 2014. In an apparent violation of that order, within days, Sivasankaran had listed the Salt Spring property for sale and transferred it in a private transaction to Axcel, according to B.C. property records.

The property has been put on the market at least three times since 2011 for about C$7 million. It’s never sold.

Meanwhile, the head-scratching case involving the Indian bank drags on. IDBI filed an $86 million claim against Axcel, which failed to repay the loan used to pay off the other Siva Group dues. Axcel has acknowledged it owes the amount, but its lawyers told the court that “our client does not have the assets and/or resources to meet the payments due.”

“As the proceedings have not concluded, it would be inappropriate to comment or verify your query in relation to a property in Canada,” Scarmans, the law firm representing Axcel and another Siva Group company that backed its loan, said in a letter. “Both companies have confirmed to us, as a result of your enquiry, that they are unaware of any money laundering investigation in Canada or otherwise.”

Wild deer graze outside the Salt Spring estate as the peal of an unanswered doorbell echoes through the woods. Whether the property is ever used is anyone’s guess -- there’s no neighboring home within sight.

It won’t go down as one of the better investments by a dealmaker once known as one of India’s shrewdest. The estate is currently assessed at $3.8 million -- adjusted for inflation, less than what Siva Ltd. paid for it 14 years ago. It’s an ironic twist given that the money laundering probe which singled out his property was prompted by outrage at the rapid escalation in real estate prices in the province.

Scott Simmons, a realtor on Salt Spring, reckons it might sell for about $3 million. He’s never heard of Sivasankaran and is dubious that a flood of dirty money has really fueled housing prices. That said, during his two decades there as a realtor, every so often the police seem to swoop in and nab white-collar crime suspects on the sleepy island, he says.

“It’s like clockwork,” he says. “They think it’s the end of the earth out here.”

--With assistance from Ganesh Nagarajan, Suvashree Ghosh and Noah Buhayar