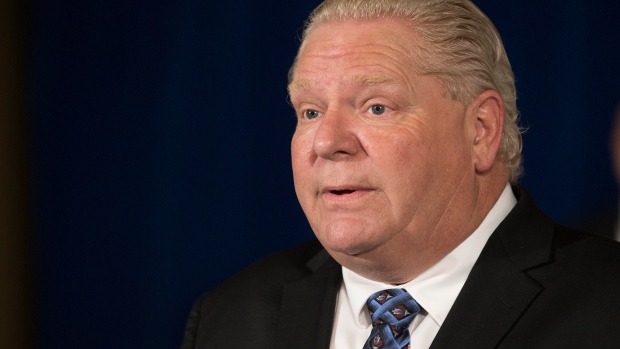 TORONTO - Premier Doug Ford says Ontario will have the highest fines in the country for people who violate public health guidelines for social gatherings.

Ford says he will discuss the new measures aimed at lowering the number of people allowed at social gatherings with his cabinet later today.

The current limit on social gatherings is 50 people indoors and 100 outdoors.

The changes come as both Ford and health officials have said a spike in COVID-19 cases in recent days can be partly attributed to people breaking public health rules at social gatherings.

The province currently has 148 assessment centres and many have seen hours-long lineups for tests in recent days.

Ford said when the arrangement with pharmacies is finalized there will be thousands of places to get a COVID-19 test.

Earlier this afternoon, the province and the federal government said they will be working together in the coming months to achieve a surge testing capacity of 78,000 COVID-19 tests per day.

Ford makes the commitment in a letter to Prime Minister Justin Trudeau outlining how Ontario plans to use its $7-billion portion of the $19-billion Safe Restart Agreement reached over the summer.

The premier said the surge testing will fulfil Ontario's per capita share of the federal national testing commitment.

Ford also said in the letter that Ontario is committed to regularly administering 50,000 tests per day by the fall, up from the current average of 25,000 a day.

Ford is expected to unveil a new strategy later this week to address a possible second wave of COVID-19.

Ontario reported 315 new cases of COVID-19 on Wednesday, and two new deaths from the virus. There were also 154 cases marked as resolved over the past 24 hours.

The province said it processed 28,761 tests over the previous 24 hours.

A dozen new COVID-19 cases were reported in schools, including six students, four staff, and two individuals who were not identified.