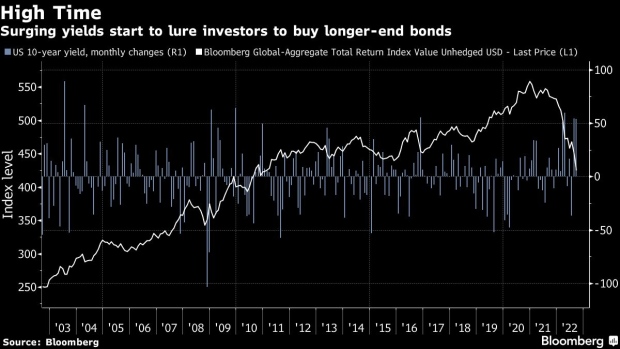 (Bloomberg) -- One of Canada’s largest pension funds is boosting its exposure to bonds, citing attractive yields after the worst selloff in a generation.

The Ontario Teachers’ Pension Plan is increasing its holdings of inflation-protected debt, along with some investment-grade and junk notes, said Jo Taylor, president and chief executive officer of the fund that manages C$243 billion ($177 billion). That comes after it slashed weightings of bonds last year in favor of infrastructure and property investments to hedge against inflation.

“What do we think about bonds? -- getting more attractive,” Taylor said in an interview from the fund’s Singapore office. “We’ll probably increase our allocation to fixed income a little bit but we are still lightly allocated compared to what we might have been given the type of plan that we are.”

A growing cohort of investors are scooping up bonds, with the likes of Citigroup Inc.’s Steven Wieting and JPMorgan Asset Management drawn by attractive valuations and growing bets for an economic downturn. But, the Federal Reserve’s resolve to tame inflation renders these wagers a precarious proposition, as another wave of aggressive tightening may fuel more losses for fixed-income assets.

The Toronto-based firm cut its exposure to bonds to just 14% of assets last year, before increasing it to 18% in June. Taylor is reluctant to call a bottom in the market, given the gyrations “over the last couple of years,” he added.

A Bloomberg gauge of investment-grade debt has dropped about 20% this year, while 10-year Treasury yields climbed more than 210 basis points to head for their biggest annual increase since 1962 based on data compiled by Bloomberg. The Fed’s aggressive rate hikes have spurred the drop, and even inflation-protected debt has suffered, with a Bloomberg index tracking the securities from 12 markets showing a 26% loss in 2022.

The rate hikes, mirrored by other major central banks, have led to an inversion in yield curves with investors betting that a recession will follow to spur cuts in policy rates.

Gundlach Starts Buying After Worst US Treasury Rout in Decades

Ontario Teachers’ plans to shift into longer-term bonds after earlier seeking refuge in shorter-duration debt to better withstand the surge in borrowing costs.

“We may change that a little bit, where we are picking to have longer-duration bonds because they offer us interesting interest rates,” he said, citing Australian government bonds yielding 4% to 5%.

Corporate bonds are also appealing, and the fund is building up junk-bond teams in Toronto and London to increase its exposure there.

Ontario Teachers’ plans to increase its exposure outside North America by deploying 50% of new investments in Europe and Asia. With new offices in Singapore and Mumbai, the fund wants to extend its Asian exposure beyond China, which is grappling with slower growth, an aging population and a real-estate market crisis.

“China is a good reinforcement of what we are seeing more broadly, which is that we are at a point of change,” he said. “Whatever has been working for the last 15 years probably won’t work for the next five.”

The fund has no plans to increase its exposure to private equity, which accounts for about 23% of assets, Taylor said. Direct investments in financial services and industrials, along with infrastructure assets, helped the fund post a net return of 1.2% in the first half of 2022, even as most global assets tumbled.