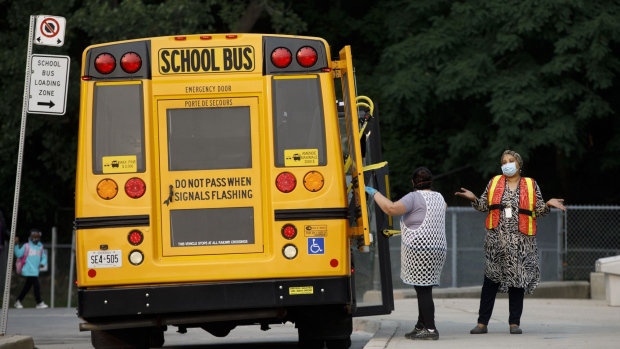 A school bus drops off a student at Portage Trail Community School in Toronto, Ontario, Canada, on Tuesday, Sept. 15, 2020. The Toronto District School Board is spreading the return to class over three days as part of a staggered reopening plan designed to help children get used to new Covid-19 safety protocols, The Canadian Press reports. , Photographer: Bloomberg/Bloomberg

Ontario Teachers Pension Plan has agreed to acquire a majority stake in Mitratech, a provider of legal and compliance software, in a deal that values the company at more than US$1.5 billion, according to people with knowledge of the matter.

A transaction may be announced as soon as Wednesday, some of the people said, asking not to be identified because the deal hasn’t been announced. Ontario Teachers is acquiring the stake from private equity firms TA Associates and HG Capital.

Representatives for the pension plan and Mitratech declined to comment. Spokespeople for TA Associates and HG Capital didn’t immediately respond to requests for comment.

TA Associates acquired a majority stake in 2015 from Vista Equity Partners, before HG Capital became a majority owner in 2017.

Mitratech has around 500,000 global users across some 1,500 clients which have included companies such as BlackRock Inc., McDonald’s Corp., Royal Dutch Shell Plc, Juniper Networks Inc. and Gilead Sciences Inc., its website shows.